One crew member injured in copter crash in Raigad

Indian Navy officials revealed that the surveillance sortie was underway off the coast south of Mumbai. 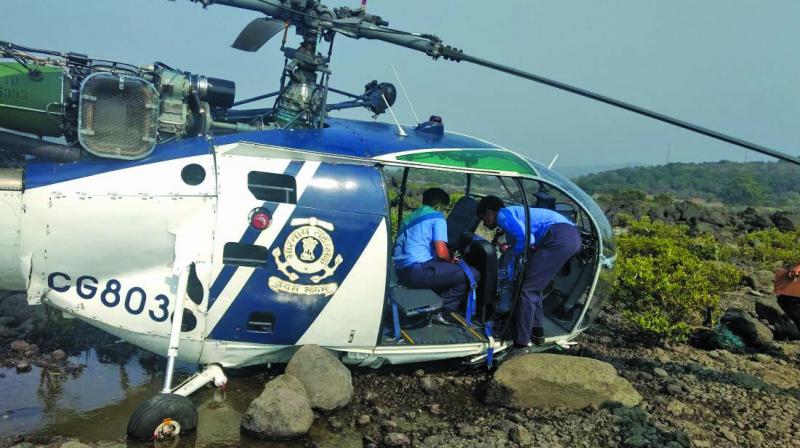 The incident took place around 2.48 pm near Nandgaon beach in Murud.

Mumbai: A Coast Guard helicopter, Chetak-CG803, which was on a surveillance sortie with four personnel onboard, crash-landed in Raigad district on Saturday afternoon. The incident took place around 2.48 pm near Nandgaon beach in Murud. The helicopter made a rough landing on a rocky patch, an armed forces official said. A full-fledged investigation has been ordered by the Navy to ascertain the facts behind the crash-landing.

A woman assistant commandant, Penny Chowdhary, suffered injuries and was found in an unconscious state. The three other fliers — deputy commandant Balwinder Singh, Pradhan Navik Sandeep and Navik Baljeet — reportedly walked out of the wreckage safely.

The ill-fated helicopter was on its routine surveillance sortie and had taken off from south Mumbai. The preliminary report stated that the crew experienced technical difficulties 25 minutes after taking off.

Deputy commandant Singh was flying the helicopter and his presence of mind and impeccable skills helped land the helicopter without much damage. Precaution was taken to avoid any collateral damage, and hence they managed to crash-land the helicopter avoiding populated places and sea. The Navy and Air Force evacuated the crew and took them to INHS Asvini in Cuffe Parade.

Avinandan Mitra, deputy commandant and Coast Guard PRO, said, “There is no major damage to the helicopter. The rotors are intact; all machinery is intact. However, the tail rotor is slightly bent. No part has broken off except the right wheel area.”

Indian Navy officials revealed that the surveillance sortie was underway off the coast south of Mumbai. The helicopter, however, crash-landed six nautical miles north of Murud near Alibaug after experiencing difficulties.

The security personnel stated that though it seems to be a technical snag that led to the unscheduled landing, a detailed probe will help ascertain the exact reasons behind the incident. Meanwhile, Coast Guard has ordered an enquiry.