A fire broke out after an explosion at Novaphone chemical factory in the Boisar MIDC area on Thursday. 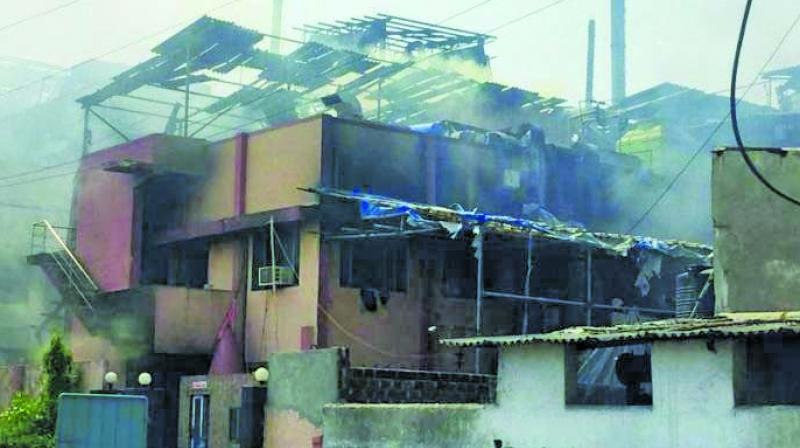 Nine fire engines were rushed to spot to douse the fire.

Mumbai: A case has been registered against the fire officer of Bhabha Atomic Research Centre (BARC), Tarapur, for failing to send a fire engine to Boisar MIDC where a fire broke out Thursday night. A case has been filed under sections 56 and 57 of the Disaster Management Act, 2005. According to Boisar MIDC police, the fire officer, S.S. Borkar, should have sent fire engines to the spot to help douse the flames.

At about 11.38pm on Thursday, an explosion caused a fire to break out at Novaphone chemical factory in the Boisar MIDC area, killing three workers and injuring 15 others. The deceased have been identified as Pintu Kumar Gautam, Alok Nath and Janu Adaria. The fire spread to five other factories i.e. Unimax, Prachi, Arti, Bharat Rasayan and Darbari. So much so that it took nine fire engines to bring the inferno under control after which, cooling operations were carried out.

Prakash Birajdar, senior inspector, MIDC police station, Boisar, said, “The district collector Prashant Narnaware has submitted a complaint against Mr Borkar of Tarapore fire station. Mr Borkar has been booked under sections 56 and 57 of the Disaster Management Act, 2005. Disaster management officers and the police control room repeatedly asked him to send fire engines but he denied, saying he could not send them without asking his seniors.”

The guardian minister of Palghar, Vishnu Sawara, has ordered an inquiry into the mishap and assured that the people responsible for the fire will be taken to task.

The MIDC police is probing the accident and trying to locate the owners of the factories. An accidental death report (ADR) has been filed. It is learned that the fire was caused by three blasts in the factory that were followed by a reactor explosion which was heard up to 8 to 10 kilometre from the site. Shutters, windowpanes and a computer were destroyed on the premises of the companies in the vicinity.