Raj Thackeray likely to welcome them at Mulund. 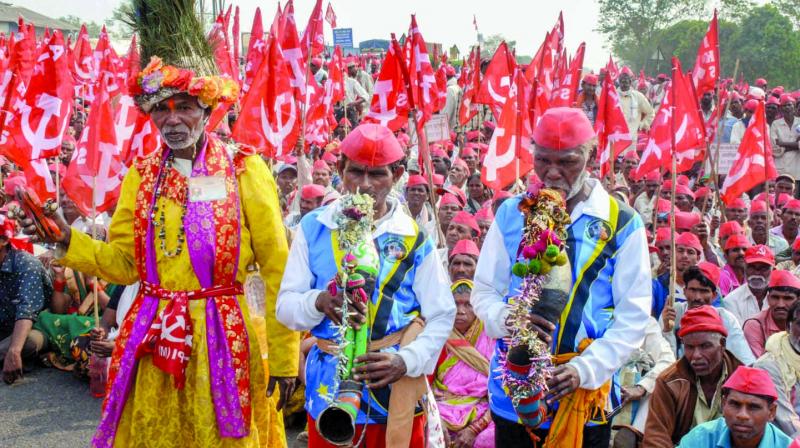 The march began in Nashik on March 6 and will reach Vidhan Bhavan on Monday. (Photo: PTI)

Mumbai: The Akhil Bharatiya Kisan Sabha (ABKS)’s  march for farmers is generating a good response from various political parties. The Maharashtra Navn-irman Sena (MNS) chief Raj Thackeray has supported the march, which is being carried out by 40,000 farmers. It is likely that Mr Thackeray will reach Mulund, Mumbai’s entry point on Sunday to welcome the farmers. The march began on March 6 at Nasik and will reach the Vidhan Bhavan on March 12.

The Communist Party of India (CPI-Marxist) has arranged a long march of farmers from Nasik to Mumbai. The farmers reached Bhiwandi on Saturday and are expected to cross into Mumbai on Sunday evening. This march has stirred the national discourse and pressure on the Devendra Fadnavis government is mounting.

Many political parties have extended their support to this walkathon by farmers seeing its political significance. The Congress and the Nationalist Congress Party (NCP) leaders have already extended their moral support for the agitation and so has the Shiv Sena. Now the MNS chief too has declared support for the protest. According to MNS sources, seeing the mass support that the agitation has received from farmers, Mr Thackeray may reach the Mulund toll point and welcome the protesters into the Maximum city.

On Monday, these farmers will reach Azad Maidan by afternoon, from where the next phase of the agitation will be declared. ABKS’s leader Ajit Navale has stated that this will be an indefinite agitation by farmers.