Leopard cub is rescued in Nashik

The incident was a reminder of a similar instance that occurred two months ago in Nashik. 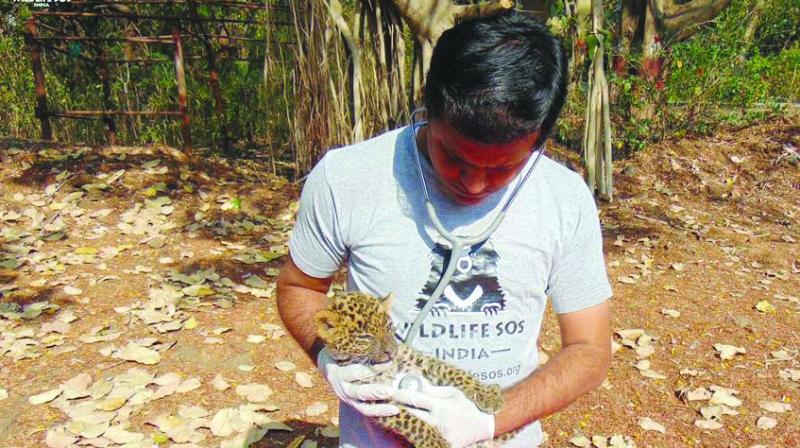 Mumbai: A 10-week-old male leopard cub, which got separated from an adult leopard, was recently rescued by state forest department officials from the outskirts of a Nashik village. It will be  housed at the Manikdoh Leopard Rescue Centre, run by NGO Wildlife SOS and the forest department. The cub had got separated from the adult leopard after they were spotted roaming in the village’s sugarcane fields by local residents who had then chased them out.

The incident was a reminder of a similar instance that occurred two months ago in Nashik. A tiny four-month-old female leopard cub was rescued from a village in Nashik two months back.

In the current instance, local farmers of Mhalsakore village found the leopard cub while they were out on their fields harvesting sugarcane. The male cub is estimated to be three months old. He will be raised along with the recently rescued female leopard cub and will be cared for at the Manikdoh Leopard Rescue Centre, run by Wildlife SOS in Collaboration with the Forest Department.

“He is slightly weak and is currently put him on multivitamin supplements. We will have to hand rear the cub as he can no longer be returned to the wild,” said Dr. Ajay Deshmukh, senior veterinarian at the Manikdoh Leopard Rescue Centre.

Kartick Satyanarayan, co-founder of Wildlife SOS said, “This is the second leopard cub to have been rescued in the last two months. Cubs this young cannot survive on their own as they are dependent on their mothers for the first two years.”