Maharashtra’s first floatel to be open for public by March 19, will host 700 guest. 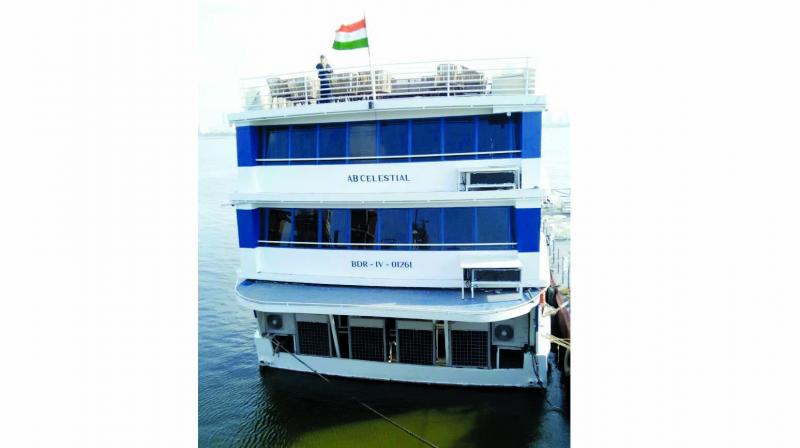 The floating hotel was manufactured in the U.S.

Mumbai: Gone are the days when one sat on the rocks by the Bandra-Worli sea link as a silent spectator to the calmness of the Mahim bay swaying with the Arabian Sea. The city’s first floating hotel, popularly known as floatel, is set to sway you along after its inauguration by chief minister Devendra Fadnavis on Friday.

The state-of-the-art floatel, manufactured in the United State of America, is anchored at the Bandra side of Bandra-Worli Sea Link (BWSL). It hosts three restaurants, a sky deck along with two multinational cuisine restaurants and including a club lounge equipped with a coffee shop. The floatel, which is a first in the state, can host around 700 guests at a time.

The project is a joint venture between the Maharashtra Tourism Development Corporation (MTDC), AB Hospitality and WB International Consultants. Although the state government has not made any investment for the joint venture, the MTDC would get a share of 11 per cent arising out of the profit from the floatel, as per the contract signed between the two.

Satish Soni, joint managing director, MTDC, confirmed the opening of the floatel for the public after the inauguration tomorrow. Chetan Bhende, chief executive officer (CEO), of WB International Consultants, said, “We have all the clearances in hand and the chief minister is inaugurating it tomorrow, followed by which the floatel would be made open for public by March 19.”

Meanwhile, the floatel was earlier launched in 2014 by then tourism minister Chhagan Bhujbal, but was not opened to public due to permission issues, which included getting clearances from several departments like the traffic department. One of the reasons for the traffic department denying permission was that traffic movement in the area would increase along with that of Maharashtra Maritime Board, (MMB) as their jetty would be used for accessing the floatel.

Initially, there were plans to have the floatel anchored near Nariman Point, but the city collector along with the Mumbai Heritage Conservation Committee (MHCC) denied the same citing certain concerns.

Meanwhile, Atul Patne, chief executive officer (CEO), MMB, said, “From our side, we have given all clearances for the floatel and have also offered the MTDC and operators to use our jetty at Bandra for having access to the floatel.”

Prior to this, states like Kerala, Goa and West Bengal had introduced floatels.