Through a student-led conference organised by the Kids Education Revolution (KER) 2019 at Bandra, students shared their experiences. 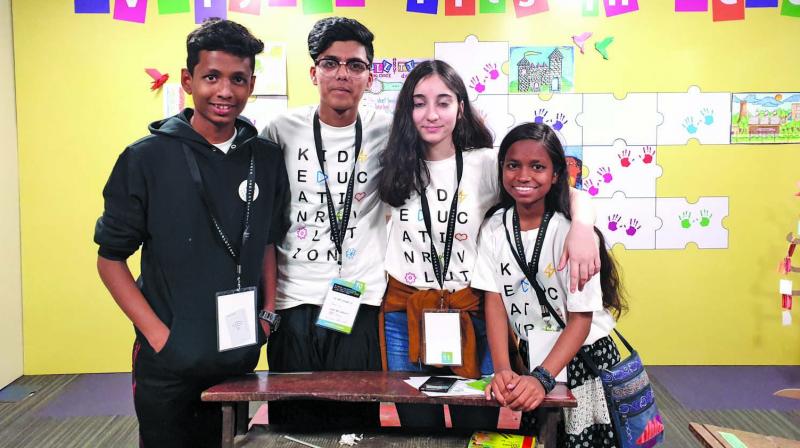 Mumbai: The Right of Children to Free and Compulsory Education (RTE) Act, 2009, prohibits any kind of physical punishment and mental harassment towards children and makes it a ‘punishable’ offence, yet the students allege that corporal punishment is widely practiced in the country. Through a student-led conference organised by the Kids Education Revolution (KER) 2019 at Bandra, students shared their experiences.

Supriya Sharma, a class 10 student, from Rajkiya Pratibha Vikas Vidyalaya in New Delhi said that her school academics are prioritised over subjects related to art. “Our school authorities feel that students should strive to become a scientist, engineer or a mathematician, while the students who desire to do something in the field of arts are wasting their time,” she said. Ms Sharma desires to take up Arts and major in Psychology to prove that opting for Arts doesn’t mean being weak in studies rather it is the student’s choice.

Abbas Ali, another student from Government Boys senior secondary school, Saket, said that corporal punishment such as kicking or beating should be stopped. He expressed his dislike over the harsh punishment that he faced at school by his school authorities and said that it has caused him mental and physical stress.

Anahit Azzumanyan, another student from PhysMath school in Yerevan, Armenia, stated that she did not face any harsh punishment from her authorities at school. “The law against corporal punishment is stringent in Armenia and hence it is not normal. However, the problem is lack of communication between teachers and students and through KER, I want to learn how to break the barrier,” she said. The summit featured  current realities of the education system through art, display of artefacts, student-educator panel, etc.