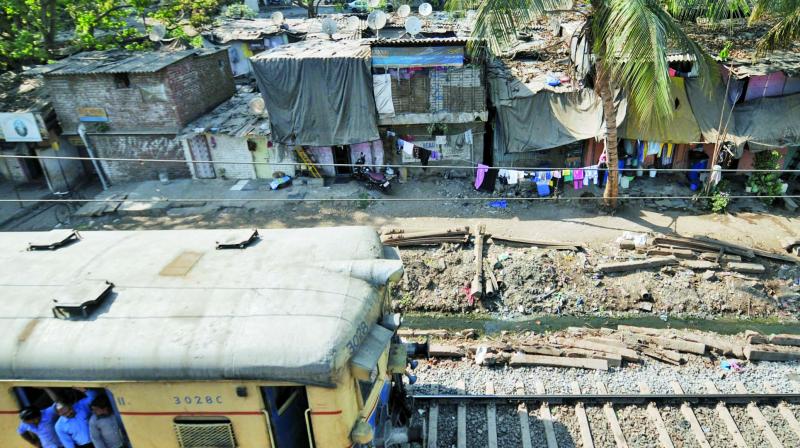 Notices by railways to slum/shanties at Andheri, GTB Nagar and King Circle.

Mumbai: In its survey, the Slum Rehabilitation Authority (SRA) has found over 5,000 shanties along all the three railway lines in the city. The survey, which was started in 2016, has been completed now.  The Harbour line tops the list with more than 2,000 shanties, and Dharavi has the lowest number of hutments along the railway tracks. In 2016, the authority had received a No Objection Certificate (NOC) from the railways to carry out the survey. Considering the slum population, the survey was conducted in zones like Kurla, Chembur, Dharavi and Borivali. As a pilot project, the SRA has planned to rehabilitate the slum dwellers and free up the space adjoining the railway tracks.

The eligibility process is underway, and the figures of eligible hutments are yet determined. However, even if slum dwellers are found not to be eligible for the scheme, they will be accommodated in some or the other rehab project of the SRA.  According to the survey, hutments are in large number along with the railway tracks of Chembur. Around 2,600 hutments are spread across 10.45 sq ft area along the tracks, according to the survey. This is followed by Kurla in Central line which houses around 1,116 hutments, Borivili in Western line with 1,068 hutments.

There are a total of 5,374 hutments in all these four divisions. Surprisingly, Dharavi in western line only houses 556 hutments, which is the lowest. “This is the first ever record on slum population along the railway tracks, now the government officials can access this records for any future plans,” said an official from the survey department.

The biometric survey was conducted by the agency that has been surveying the hutments in the entire city.

“Initially, the railways never agreed to survey the shanties. It was only in the last year, after efforts from the state, SRA finally received a nod to carry out a survey on June 27, 2016,” said an official, in-charge of the biometric survey.

The slum clusters were identified near tracks in Kurla, Dharavi, Chembur, Borivali, and post the identification of clusters along railway lines; the survey was initiated. It was executed after the surveyors visited each and every hutment and verified Adhaar card proof and uploaded the information to a website real time.  “During the survey, it was noticed, people were demanding in-situ rehabilitation (on the same land) which won’t be possible. The SRA may accommodate in any other rehabilitation project,” added the official.