Petition stated that potholes were observed a year after the bridge was open for public. 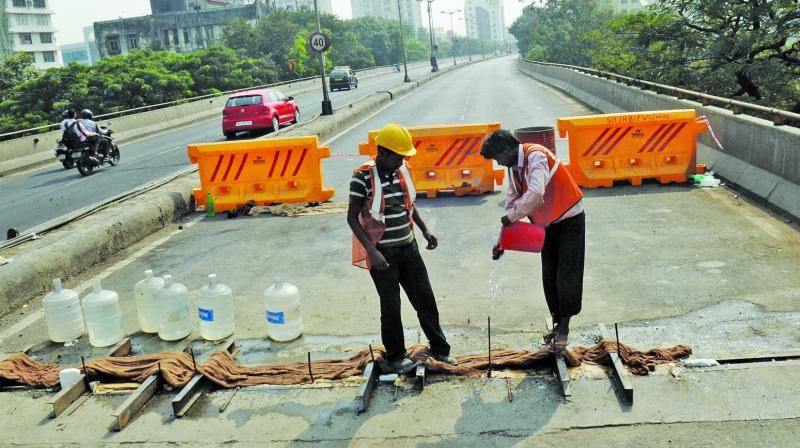 The HC ruled that BMC carried out the work before submitting the related structural audit report.

Mumbai: The Bombay high court has stayed Brihanmumbai Municipal Corporation’s (BMC) repair work at the Lalbaug flyover, which connects Parel to Byculla, till February 9 on the grounds that the civic body carried out the work before submitting the related structural audit report. The court was hearing a petition, filed by NGO Janhit Manch, which contended that the BMC should not be allowed to start the repair work until the experts prepare a structural audit report.

On Tuesday, BMC counsel Geeta Joglekar told the court that BMC has already called for the audit report and it would be submitted to BMC officers by January 31. After hearing this, the court said, “Pending the audit report does not carry out any work on the flyover. The BMC’s standing committee orders directing for resurfacing and realignment work on the Lalbaug flyover shall not be carried out until further orders.”

On Monday the high court had asked the civic body if it is necessary to obtain structural audit report before starting the repair work on Lalbaug flyover. Further the court observed that there was no clarity whether the work would start before the date. A division bench of Justice Abhay Oka and Justice Anuja Prabhudesai was hearing the petition. Petition also pointed out various incidents since the construction of the bridge began.

Petition stated that potholes were observed a year after the bridge was open for public. Also in 2012, a concrete block had fell down on road. Further, it has pointed out that in November 2016 a major gap was visible between two slabs. Advocate Sumedha Rao who appeared on behalf of the petitioner earlier had informed the high court that the BMC had floated e-tenders for repairs and resurfacing of the bridge at a cost of Rs 3 crore. She also brought to the notice of the court that without getting structural audit, it will not serve any purpose.