The civic body has filed a complaint against Mohammad Kallu Shah under the MRTP Act for constructing illegal structures. 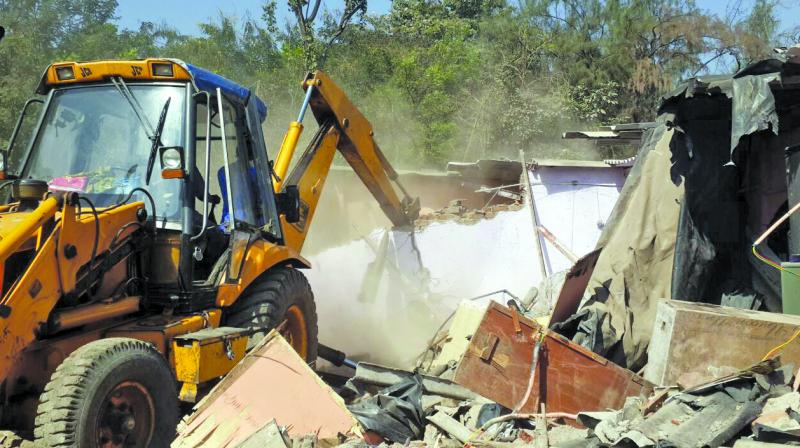 The demolition work being carried out at Ghatkopar.

Mumbai: In a major demolition drive, the Brihanmumbai Municipal Corporation (BMC) has razed many illegal constructions built on about two acres of land at Pantnagar Junction, Ghatkopar, on Wednesday. The civic body has filed a complaint against Mohammad Kallu Shah under the Maharashtra Regional Town Planning (MRTP) Act for constructing illegal structures.

According to civic officials, the BMC has made several reservations, like for roads, fire stations, hospitals, clinics and green spaces on the two-acre land, under the city’s development plan. Mr Shah had erected several illegal constructions by encroaching on the said plot of land. In addition to this, he had also rented the space for various purposes, like a nursery, sand shops, parking lots, etc.

A senior civic official said, “The BMC had received several complaints against Mr Shah for building illegal structures. Hence the demolition drive was carried out. The BMC has taken possession of the vacant plot and has now erected a fence around it. The adjoining land, which belonged to the BEST, has been handed over to the undertaking.” The civic body used six JCB machines, two poclain machines and 15 dumpers to carry out the demolition drive.