The MNS chief tweeted a caricature of mayor Vishwanath Mahadeshwar confined to an animal enclosure at the zoo. 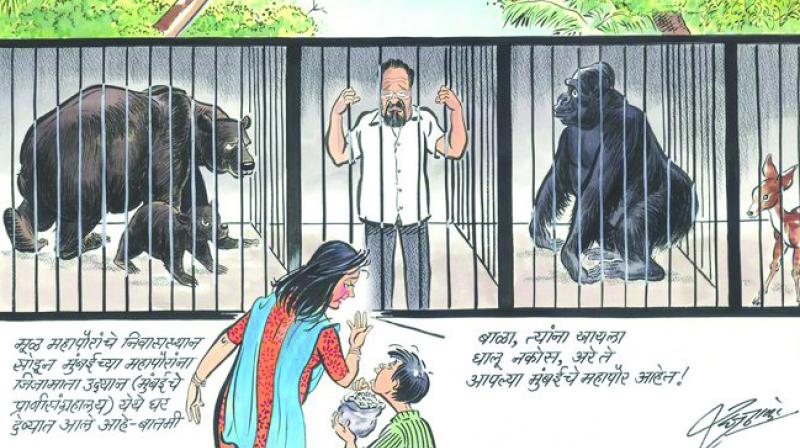 Mumbai: Maharashtra Navnirman Sena (MNS) chief Raj Thackeray has taken a swipe at the Shiv Sena over its decision to shift the Mumbai mayor’s residence to Byculla zoo. The MNS chief tweeted a caricature of mayor Vishwanath Mahadeshwar confined to an animal enclosure at the zoo.

The caricature also shows a woman come to visit the zoo with her son, telling the latter, “Don’t feed him. My dear, he is our Mumbai city mayor.”

This is the second instance in as many days that the MNS chief has targeted the Sena through his caricatures. In a caricature tweeted by him on November 7, he showed Sena chief Uddhav Thackeray and chief minister Devendra Fadnavis wrapped in a saree worshipping a farmer and seeking a gift from him on the occasion of Balipratipada.

Also in the caricature, the farmer’s wife is shown warning him, “Now listen, I am voicing my decision. If you even give a penny as gift, watch out…!”

The decision to shift Mr Mahadeshwar to a civic bungalow at Byculla zoo was taken a few days ago in the presence of top Sena leaders and municipal commissioner Ajoy Mehta.

The proposal to hand over the mayor’s bungalow plot to the BTRSN, headed by the Sena chief, for construction of the memorial was approved without any discussion in the civic house on February 27 last year.

The BMC improvements committee has also given its nod to lease out 11,500 sq.m. of the mayor’s bungalow plot for the construction of the Balasaheb Thackeray memorial at a nominal rate of `1 per annum for a period of 30 years.