The pandal works of nearly 10 mandals in Dahisar have been stopped, said mandal officials. 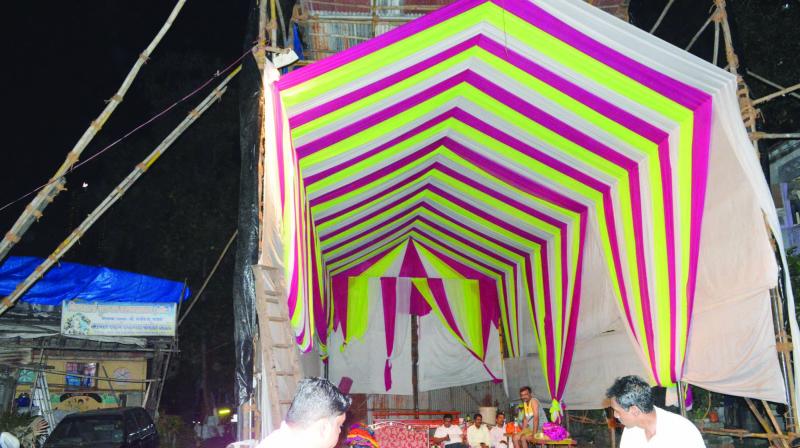 As per civic data, 290 mandals were denied permissions.

Mumbai: Incensed with the BMC’s action against Ganesh mandals that have erected pandals despite having been denied permission, mayor Vishwanath Mahadeshwar has decided to intervene in the matter, with a solution likely to be reached at a meeting convened at his bungalow on Monday.

According to civic data, out of the 3,523 applications received from city mandals, 773 were cancelled owing to duplication. Of the 2,750 applications that were processed, permission was granted to 2290 mandals whereas 290 mandals were denied permission. Applications of 170 mandals are still in process.

The civic body have asked the mandals, who have been denied permissions, to stop pandal works. The pandal works of nearly 10 mandals in Dahisar have been stop-ped, said mandal officials.

A mandal official said, “We are caught in a catch-22 situation. The BMC has denied us permission to erect pandals without paying heed to the fact that the dispute was created due to technical problems in its own online system. The deadline for resubmitting the forms has also expired. In such a scenario, we have been left with no other option but to erect pandals without permission.”

Narendra Dahibavkar, president of the Brihanmumbai Sarvajanik Ganeshotsav Samanvay Samiti ( BSGSS) said, “We have received complaints from several mandals that BMC has asked them to stop pandal works. Hence, we have decided to approach the mayor in this regard.”

A meeting with BMC and BSGSS officials has been convened at the mayor’s bungalow on Monday.