The charity commissioner of Mumbai had issued the notice to the mandal on August 25. 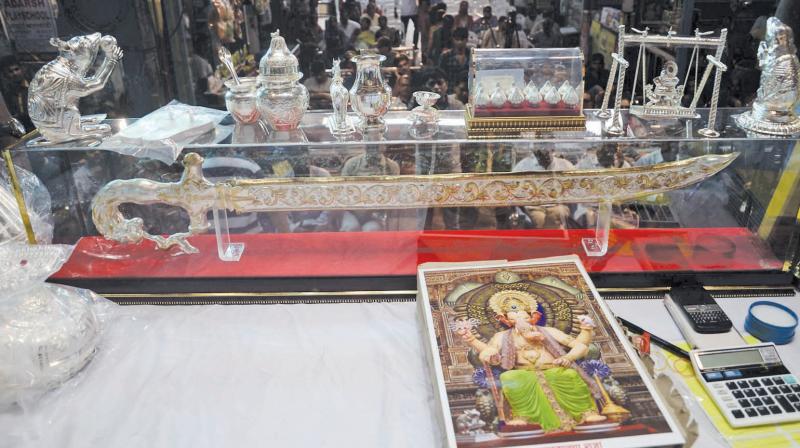 Some of the offerings given by devotees to Lalbaubcha Raja on display at the auction. (Photo: Shripad Naik)

Mumbai: The iconic Lalbaugcha Raja Ganesh Mandal has decided to challenge a notice from the charity commission asking the former to count its offerings before its officers, in the Bombay high court on Monday.

The charity commissioner of Mumbai had issued the notice to the mandal on August 25.

Sudhir Salvi, chairman of the Lalbaugcha Raja Mandal, told The Asian Age on Saturday — when the trust’s annual auction of offerings was being held — that the notice issued by the commission before the festival is “arbitrary and not according to law”. “We will challenge it before the high court on Monday,” he said. Mr Salvi said, “Two days before the Ganesh festival, we had received a notice from the commission. But we were busy preparing for the festival, so we are challenging it now. If we don’t challenge it, next year they will come again and disrupt the process.”

Subsequently, officers of the charity commission were sent back by the office-bearer of the trust because it did not have any notice about keeping watch on the auction.

Meanwhile, the mandal put silver and gold articles weighing 75kg and 5.5kg up for auction. The event, which is usually organised over three days, was conducted on a single day this time. Certain curios and ornaments were being sold at market rates on Saturday while gold chains, gold necklaces and a modak made of gold and silver were the major attractions.

Mr Salvi said, “Every year, counting of the offerings was conducted in front of the media and mandal office-bearers. We also called employees of the Bank of Maharashtra and Mahanagar bank to count cash and goods. We maintain total transparency in the counting and auction procedure so there is no scope for hiding anything.”

“I wonder why the charity commission is running behind us? We’ve paid our I-T returns, PF and all the taxes of local authorities. We conduct audits of our income and expenditure and make it public... What is the reason for sending officers here?”