Over 542 trees likely to be hacked

According to public notices issued by the tree authority since January 2019, a total 8,792 trees are proposed to be axed. 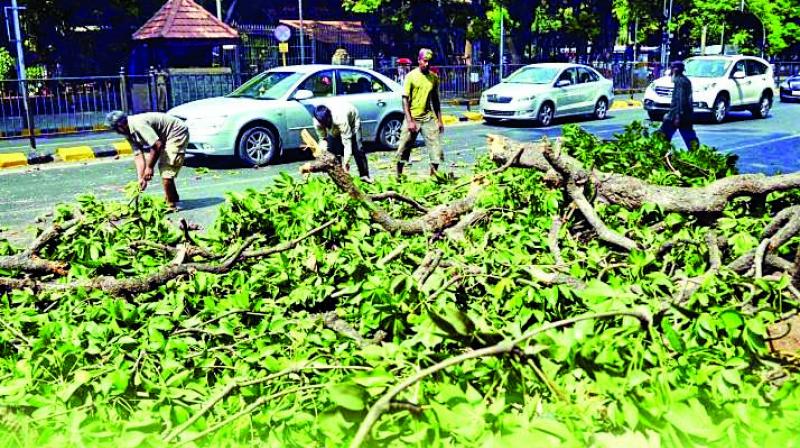 According to notices issued by the tree authority since Jan. 2019, a total 8,792 trees are proposed to be axed.

Mumbai: Four wards of Mumbai are set to lose more than 542 trees even as the civic tree authority has come up with proposals to hack them for various developmental projects. According to public notices issued by the tree authority since January 2019, a total 8,792 trees are proposed to be axed.

As per Zoru Bathena, Mumbai-based tree activist who has been compiling the list of tree-cutting proposals published by the tree authority, the latest notice has seven proposals for tree-cutting in the GS, L, ME S and T wards.

The seven are for removal of trees for projects related to the veterinary hospital in GS ward (49 trees); proposed residential building of L&T in Powai (55 trees); construction of a tunnel from Amar Mahal to Trombay (152 trees); construction of a major bridge across the Thane creek on the Sion-Panvel road (127 trees); sewerage treatment plant for the Mithi river (65 trees); and nullah-widening at Mulund (94 trees).

Mr Bathena said that a total 8,755 trees were proposed to be axed in 2018 but this year, the number of such trees had surpassed last year’s number inside ofseven months.

Mr Bathena said, “Some of the tree-cutting proposals are repetitive, including 2,702 trees at Aarey Milk Colony due to non-functioning of the tree authority. However, the total number of trees proposed to be cut this year equals 38 trees per day.”

Meanwhile, a tree authority official said, “We have been creating awareness among developers to go for transplantation rather than simply cutting the trees.

“The total number of trees to be cut have not yet been finalised. We will decide after considering the alternatives,” the official added.