The company has also assured that all its other plants are functioning normal and there would be no disruption in supply of petroleum products. 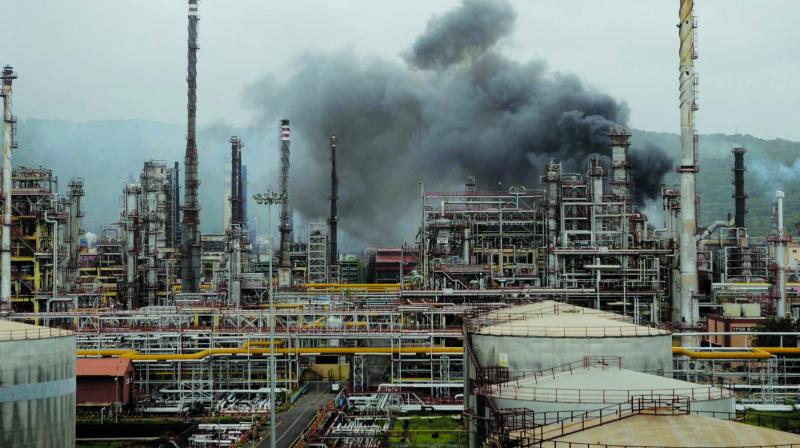 Fire broke out at BPCL’s hydrocarbon plant in Mahul.

Mumbai: Bharat Petroleum Corporation Limited (BPCL) has decided to conduct a full-fledged inquiry into the fire that took place on Wednesday afternoon at its hydrocarbon plant in Mahul. The company has also assured that all its other plants are functioning normal and there would be no disruption in supply of petroleum products.

A massive fire had broken out following a blast in the compressor shed of the plant. While there were no casualties reported, 43 people were injured, of which one is in a critical condition. The fire was doused at 1.50 am on Thursday.

Stunned by the blast and the resultant fire, BPCL top authorities held a meeting on Thursday and decided to carry out a detailed probe into the accident. “An investigation team will be set up and it will probe the cause of the fire. Based on its report, we will take all necessary steps that need to be taken to normalise the hydrocarbon plant,” said BPCL spokesperson Mr Sundararajan. According to company sources, the investigation will look into the measures that are needed to prevent such accidents in the future.

A statement issued by the company said, “The fire at BPCL’s Mumbai refinery  hydrocarbon plant was put off  last (Wednesday) night. All other plants are normal and there is no disruption in the supply of petroleum products.

All the 72 tons of fuel available in the hydrocarbon plant has been burnt. Even though the fire was brought under control within a few hours, the remaining hydrocarbon continued to burn till the stock was exhausted, said company officials.