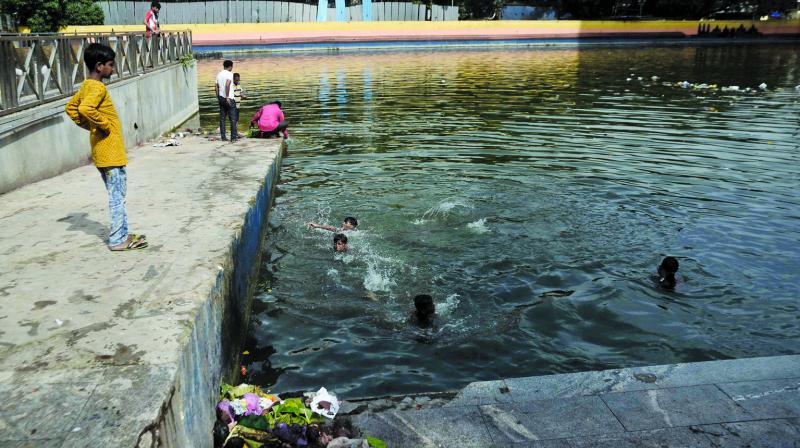 A kid looks at the debris floating on the surface of the Charai pond. (Photo: Shripad Naik)

Mumbai: The Brihanmumbai Municipal Corporation (BMC) has spruced up 15 city ponds where idol immersion will take place, ahead of Ganesh Chaturthi. Under the cleaning process, the civic body cleared the muck that was left behind last year and increased the level of oxygen in the water body with a view to minimise the poisonous content in the water. While most civic wards hired private contractors to clean the talaos at a cost amounting to lakhs, the rest cleaned them with the help of the ward staff.

In the M/West ward (Chembur West), the ward office has spent around `7.5 lakh for cleaning the Charai Talao, a famous spot in the ward for Ganesh idol immersions. “First, we de-watered the pond to reduce the water level, post which, the sticky silt left during the previous years’ immersion is physically removed and transported. Further, if the steps are broken, they are repaired so that the devotees can go ahead with the visarjan rituals smoothly,” said Harshad Kale, assistant municipal commissioner from Chembur.

The R/South ward (Kandivili) however, moved one step ahead and has set-up nets to filter out the muck instantly after immersions at an immersion site at Charkop. The ward has also roped in NGOs to keep the pond premises clean during visarjan days. “We have hired few workers who will be trained to carry the idol to one particular place in the talao, so the immersions are not scattered,” said an official from the ward. Meanwhile, in areas like Malad, which houses Bhujale talao, the civic staff carried out the cleaning manually.

The areas were ponds are utilised for immersion include Kurla, Andheri (east), Goregaon, Sion, Bhandup and Nahur.