Locals stated that the river was barely flowing over the bridge while the the victims were crossing it. 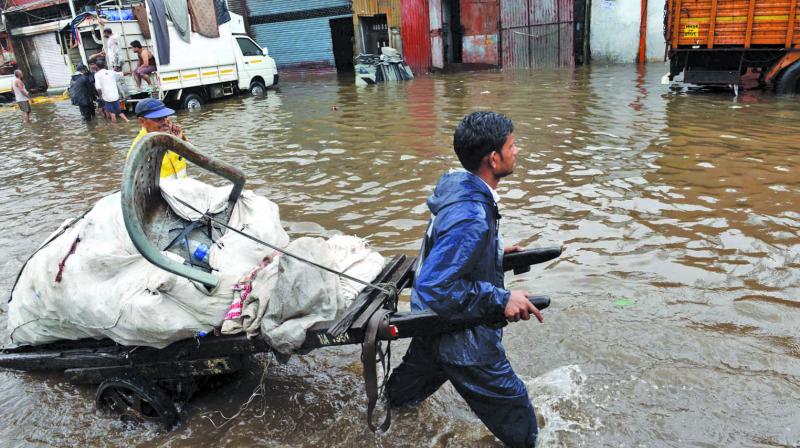 Panvel, situated in Raigad district and a node of Navi Mumbai, and its adjoining areas have been experiencing heavy rainfall since Sunday midnight.

Mumbai: A couple was washed away while they were crossing a bridge in Panvel on Tuesday. The tragic incident took place at around 7:30 am on Tuesday, when the couple was crossing the bridge over Gadi River at Umroli village, 15 kilometers from Panvel.

Officials stated that the bodies of the couple have not yet been recovered. Following the incident, a team of National Disaster Response Force (NDRF) has been deployed at the site.

The couple has been identified as 30-year-old Aditya Amre and 28-year-old Sarika Amre — his wife. Mr Amre worked as a salesman in an electronic showroom in Navi Mumbai’s CBD Belapur, while his wife was a homemaker, the police said.

According to a preliminary probe, the bridge located on the Matheran Road in Umroli village did not have a railing,” said an official from Panvel police station. “The bridge was not very high. Moreover, the river was flowing above the bridge during the incident,” the official added. He stated that incessant rains on Monday worsened the situation.

Locals stated that the river was barely flowing over the bridge while the the victims were crossing it. However, the current became stronger and suddenly the river swelled, taking the couple with it. They also revealed that the couple did not belong to the village and had shifted there only recently.

The fire brigade officials continue to conduct search operations for the missing couple. An NDRF team from Khopoli too has been roped in at the site. “We are looking for the couple. However, we suspect that they have been washed away along the river due to strong currents,” added the official.

Panvel, situated in Raigad district and a node of Navi Mumbai, and its adjoining areas have been experiencing heavy rainfall since Sunday midnight.

The Panvel incident comes just a few days after two people were washed away by the high tide in Mumbai’s Marine Drive.