CM said the drainage system in the legislature premises was quite old. 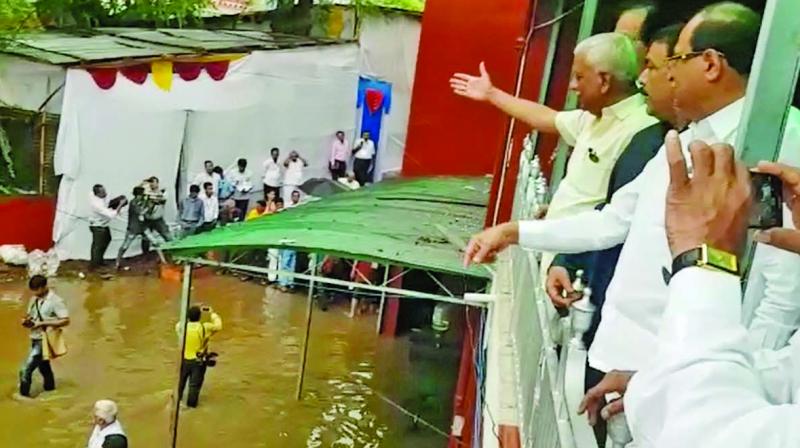 Nagpur: Maharashtra chief minister Devendra Fadnavis on Monday announced an inquiry into the lapses that led to water-logging in the Vidhan Bhawan prompting the power cut and adjournment of both Houses of State Legislature on third day of commencement of Maharashtra legislature on last Friday.

Mr Fadnavis, while replying to the concerns of Opposition benches, said a full-fledged inquiry will be conducted into the serious lapses of those responsible including the public works department (PWD) staff that led to choking of gutter lines in the Bhawan. Mr Fadnavis said the drainage system in the legislature premises was quite old and designed to handle 125 mm rainfall capacity but the city received 282 mm rains in 24-hours.

Moreover, he said the rainfall between 8.30 am and 2.30 pm was 263 mm and the unprecedented rains were close to all previous records. The rainfall in July has also crossed the average rainfall of the month of August. The July 6 rainfall was to the tune of 83 per cent of average fall in the region.

Men from the Nagpur Municipal Corporation and the Nagpur police were on their feet doing their best to flush out water and clear the drainage system.

Earlier Opposition leader Radhakrishna Vikhe-Patil and group leader Ajit Pawar spared no words to ridicule the government though the attack was not directed at Mr Fadnavis. Mr Vikhe-Patil said this was the most embarrassing situation for the government to snap the power supply and close the assembly without transacting any business. It was dark all over and the speaker Haribhau Bagde himself saw the waterlogging and chocked drainage in Vidhan Bhawan.

Mr Pawar said crores of public money is spent on legislature and blackout and subsequent adjournment of legislature was a huge loss to the state exchequer. “Who ever responsible should be taken to task. This is a collective responsibility,” Mr Pawar asserted.