The CISF commandant reached the spot at around 11pm and apologized. He also asked his two juniors to do the same. 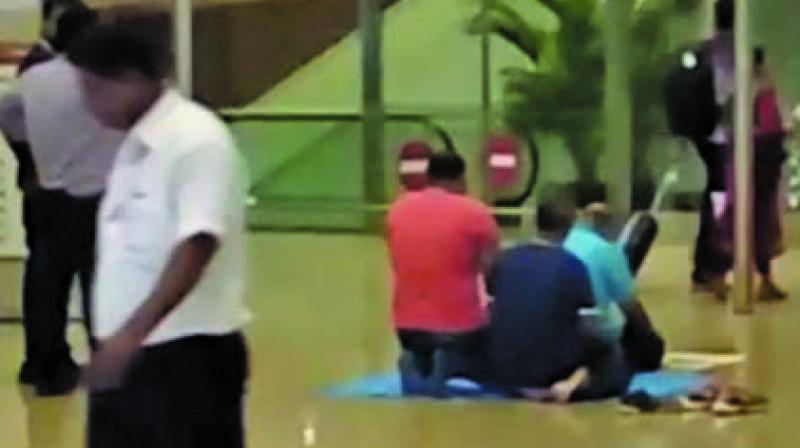 A group of passengers offered namaaz in the gangway at Mumbai International Airport’s Terminal 2.

Mumbai: A Central Industrial Security (CISF) personnel has been suspended after a member of the BJP IT cell, Mr Vinit Goenka, complained about the man’s offensive behaviour. The incident occurred on Saturday night, when Mr Goenka and his wife questioned the CISF officers on duty about a group of passengers offering namaaz in the gangway at Mumbai International Airport’s Terminal 2. When the CISF personnel told him that even he was free to do so, and allegedly badmouthed his religion, the BJP functionary tried to stage a dharna on the spot. He argued that there was an assigned place at the airport for offering prayers and passengers should not have been allowed to do so on the gangway.

Mr Goenka was headed to Delhi by Air India’s flight number 101 and had checked in at around 7.30pm when he spotted four passengers offering prayers in the gangway and protested against this. “When my wife started video recording the incident, one of the CISF men tried to snatch her phone. He also made some unpleasant remarks and seemed very confident that we would leave for our flight and forget the matter. It was then that I decided to sit on dharna and demanded an apology from their commandant,” he said.

The CISF commandant reached the spot at around 11pm and apologized. He also asked his two juniors to do the same. “Had he been as sober and reasonable as his senior, the issue wouldn’t have escalated to this level. I will however write to the ministry of civil aviation as well as the home ministry about the same for necessary action to be taken,” said Mr Goenka.

According to sources from the airport, passengers offering namaz in any open space is not an uncommon scenario.

A senior airport official said, “The airport has a prayer room that can have people of any religion to pray in it.”