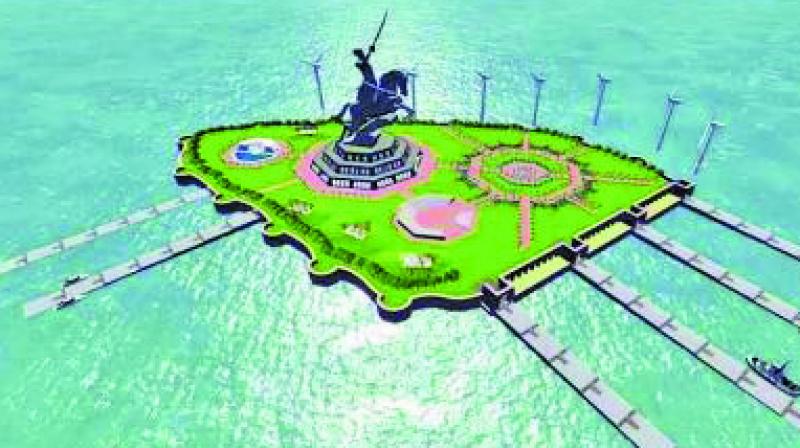 The Shivaji statue not a political stunt, says the state.

Mumbai: The state government has submitted an affidavit in the Bombay high court, supporting the construction of the Shivaji memorial in the Arabian Sea worth Rs 3,600 crore. The state said that it’s government’s discretion to decide what it should spend on. It added that the total estimated cost of the Shivaji memorial project is Rs 3,600 crores and Rs 250 crore has been already sanctioned by the legislative assembly. The state government also sadi that if more money is required for the memorial, it would seek the necessary sanction from the assembly.

A division bench of Chief justice Manjulla Chellur was hearing PIL filed by the Mohan Bhide who has opposed the construction of Shivaji memorial in the Arabian Sea, saying that it is wastage of tax payers’ money. He also claimed that there are major problems in the state such as farmers’ suicide, poor infrastructure and lack of irrigation facilities so the state must address such these issues rather spending money on construction of the memorial.

During the last hearing, the Bombay high court directed the state government to file an affidavit, asking it to reply to the petition filed by Mr Bhide.

Deputy secretary of public works department filed the affidavit. He stated, “It’s the state government’s endeavour to build such huge memorial of great leaders so that people will take inspiration from them and it is not political stunt”.

The state added that total sanctioned capital expenditure of the state in the year 2017-18 is Rs 35,504 crore and the memorial cost will not affect the sanctioned revenue expenditure. It stated that state government could bear the cost of construction of the memorial and it an asset to the state.