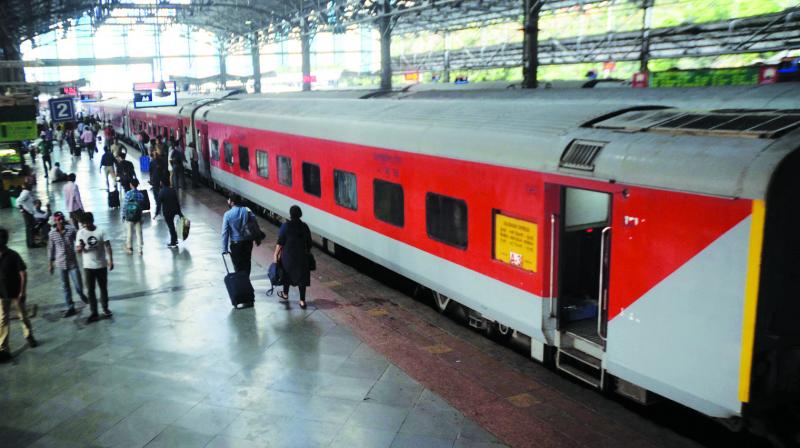 The grafting technology will be launched in a month, as the railways want it to be tested during the monsoons.

Mumbai: When one buys a ticket for premium trains like the Rajdhani, the August Kranti or the Duranto Express, one obviously expects quality service and a smooth ride. However, in the last six months, the railways have received 103 complaints from passengers who claim to have experienced sudden jerks on these premium trains, just as bad as those experienced on any other regular long-distance train.

But one can soon look forward to a jerk-free ride as the railways are planning to introduce a new grafting technology to take care of this problem. It will be launched in a month’s time, as the railways want it to be tested during the monsoons.

The railways were inundated by complaints from passengers, some of who wrote in the station manager’s book, while others called in to lodge their complaint. Still others, used email and Twitter to put their point across. A handful of these complaints have been made by pregnant women or their husbands, expressing surprise at the inconvenience suffered on premium trains such as these.

It is surprising as the coaches in these premium trains, called Linke-Hoffman-Bush (LHB) coaches, are considered to be the best rolling stock currently owned by the Indian Railways.

But officials said there has been an increase in the discontentment level of passengers who have found no difference in the riding experience on these or any other non-premium passenger train. According to officials, the problem does not occur always. “It takes place only when the train slows down or picks up speed up as the couplers used are not able to even out the weight.”

The Railway Board in Delhi has approved the technology and is testing the advisory technology in its coach-manufacturing factory in Kapurthala. An official said, “Simply put, the new technology consists of an additional rod being grafted into the couplers that connect two coaches, thereby providing more cushioning. So when the train suddenly increases or decreases in speed, the jolts experienced by the passengers will decrease.”

Frequent traveller Asim Naphade, a lawyer, said, “I use the Rajdhani a lot as I have to travel to Delhi at least once a month, and it is more economical. But the jerks are horrible, if you are standing without a support, you are likely to stumble against a berth. It’s worse if you are in the toilet.”

According to railway officials, jerks occur as the weight that is placed on couplers, which connect coaches, is not distributed evenly. The Linke-Hoffman-Bush coach has a technology by which the wheels of the trains are flexible enough to go up and down as the gradient of the tracks changes due to the topography of the area.

An extra rod will be inserted horizontally between the two couplers on the section where they overlap. The rod will evenly distribute the weight when the train accelerates or de-accelerates all of a sudden. It will be tested and cleared by the Railways’ Centre for Railway Information System.