The corporation wants to carry out the repair works as a precautionary mitigation measure in case of landslides. 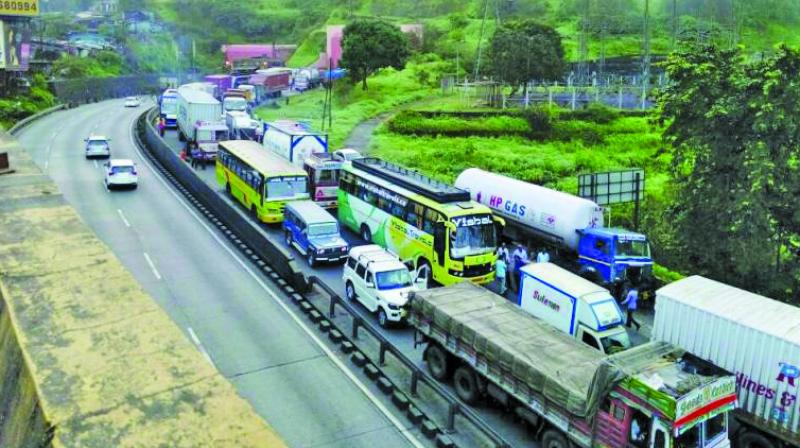 Earlier, this year, a report by a single member committee of scientist had stated that overload and climate change are damaging the Mumbai-Pune Expressway.

Mumbai: The cash-strapped Maharashtra State Road Development Corporation (MSRDC) has sought a sum of Rs 100 crore from the Union ministry of road and transport (MoRTH) for carrying out repairs works on the ghat section of the 94-km-long Mumbai-Pune Expressway. The corporation wants to carry out the repair works as a precautionary mitigation measure in case of landslides.

The repair work will be carried out on the ghat section near the Khandala tunnel wherein MSRDC plans to build slopes on the upper part of the tunnels so that in a case of landslide the rocks fall down in the valley instead of causing loss of lives by damaging the vehicles plying under the tunnel.

Kiran Kurundkar, joint managing director, MSRDC, said, “Our estimations say that the overall cost of the repair work on the ghat section would be around Rs 200 crore. Out of the Rs 200 crore required for the repair work, we have demanded 50 per cent equity from the Centre as the MoRTH is also one of the party when it comes to construction of Mumbai-Pune Expressway.”

According to MSRDC officials, the precautionary measures are being taken after a study was conducted by experts from the Indian Institute of Technology (IIT) and several other consultants. The MSRDC has already spent around Rs 100 crore on fixing nets and rock bolting on the expressway to fix the loosened rocks.

In the past, MSRDC was criticised as accidents due to landslides were becoming frequent during monsoon resulting in people losing their lives. It forced MSRDC to carry out a fresh geological survey of the rocky area on the expressway.

Mr Kurundkar added, “For this monsoon, we are well prepared and are not anticipating any landslides but the repair work on the ghat section is crucial, and we hope to get aid from the Centre.”

Earlier, this year, a report by a single member committee of scientist had stated that overload and climate change are damaging the expressway. Around 8,000 cracks were found on one-lakh pavement panels on the expressway.

The report indicated that cracks developed on the expressway due to the overload of over 50,000 vehicles daily including heavy vehicles, change in temperature and movements below the surface of Sahyadri Ghat.