The labourers could not escape as the godown was locked from outside. 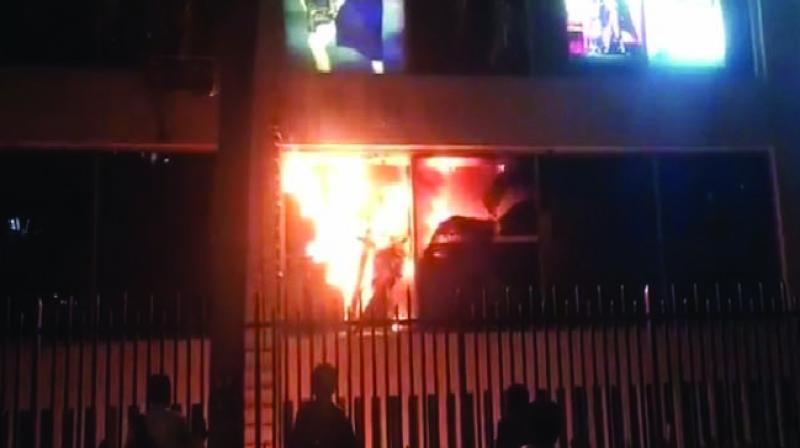 Five labourers sleeping inside a sari godown at Urali Devachi in Pune were charred to death after a fire broke out early morning Thursday.

Pune: Five labourers sleeping inside a sari godown at Urali Devachi in Pune were charred to death after a fire broke out early morning Thursday. The labourers could not escape as the godown was locked from outside. A FIR has been lodged against the owners of the shop. The deceased have been identified as Rakesh Riyad (22), Rakesh Meghwal (25), Dharmaram Vadiyasar (25) and Suraj Sharma (25) – all hailing from Rajasthan and Dheeraj Chandak (aged 23) from Latur.

Suraj Bandgar, police inspector, Loni Kalbhor, Pune rural police, said, “The fire broke out at 4.30 am in the godown where the five labourers who work at the shop were sleeping. They immediately called the owners. Although the owners reached within twenty minutes, the labourers died due to asphyxiation and burning. Two of them were charred.” He added, “We have lodged a FIR against three owners of the shop –Bhavarilal Prajapati, Sushil Bajaj and Suresh Jakhad under section 304 (abetment to murder) of the Indian Penal Code. Two of them i.e. Bajaj and Jakhad have been arrested while the third is travelling. We are finding out why the fire erupted and why the owners locked the shop from outside. If it hadn’t been locked, the labourers could have been alive.”

Nikhil Walake, assistant labour commissioner, Pune, said, “Our team visited the spot to understand the situation. We will revoke the license given to the shop. Basically, the shop is not at the right place. But the shop owner violated the act. We will investigate why he locked the shop from outside. If the doors had not been locked, the labo-urers could have escaped.”