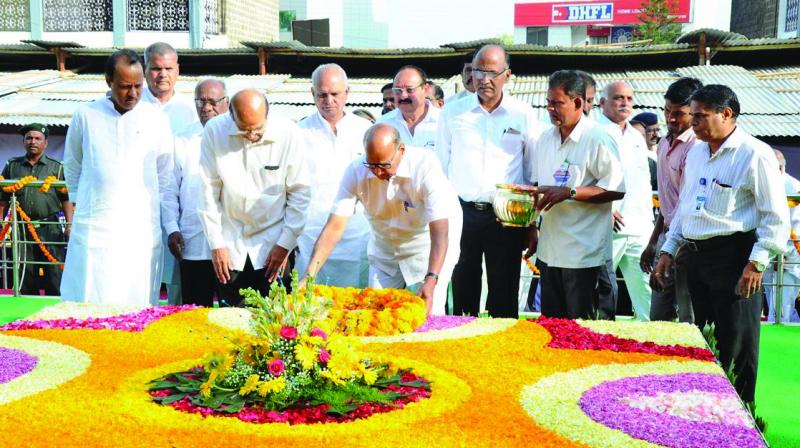 Mr Pawar has been one of the strong contenders for the top executive post.

Mumbai: The Nationalist Congress Party (NCP) chief, Mr Sharad Pawar has cautioned Congress president Rahul Gandhi on his recent remarks on his chances of taking up the Prime Minister’s post after the 2019 Lok Sabha elections. On Tuesday in Bengaluru, Mr Gandhi said that if the Congress won the maximum seats, then he would be ready to become the Prime Minister. Reacting to the comment, Mr Pawar said that though there is a wind of change blowing in the country, it was too early to talk about the Prime Minister’s post. The veteran politician, however, refrained from making strong comments on the Gandhi scion.

Talking to press in Satara, Mr Pawar said, “As of now, I can say that the trend of elections is good for change. But that doesn’t mean that one can start counting seats and numbers that they could get. There is a Marathi proverb about this hastiness. I would only say that let the numbers come, only then can we discuss the issue.”

On being asked whether he would be Prime Minister of India if Congress wins the highest number of seats from the opposition camp, Mr Gandhi had said, “Well, it depends on the how well the Congress party does. If the Congress party is the biggest party, then yes.”

Mr Pawar has been one of the strong contenders for the post of the top executive of the country for almost 27 years now. His recent moves, including calling a meet of all opposition party leaders in Delhi during the Parliament’s budget session to discuss alliance issues with West Bengal chief minister Mamata Banerjee and others, are all in line with his aspiration. Taken in that context, any talk of an alliance between non-Bharatiya Janata Party (BJP) parties as well as Mr Pawar’s reaction to Mr Gandhi’s statement on the next PM holds significance.

During his interaction, Mr Pawar also said that the Congress is the only non-BJP party which has strong presence in many states.

“It is true that in states like Madhya Pradesh, Rajasthan and Punjab, with us in Maharashtra and in others, the Congress is the main opposition party.  In other states like West Bengal, there is Ms Banerjee, in Andhra, Chandrababu Naidu and Chandrashekhar Rao in Telangana, who are also important players. But on the national level, the Congress is the biggest party, other than the BJP,” he added.