Bhujbal, 70, in jail since March 2016, was granted bail on May 4 by the Bombay HC after considering his old age and deteriorating health. 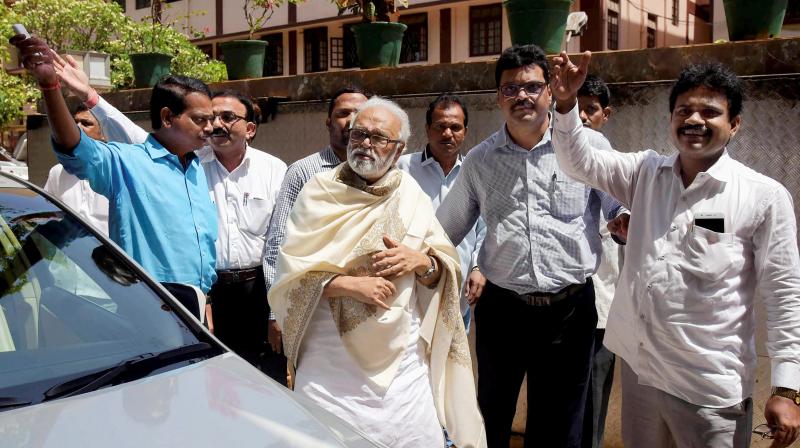 As per doctors' advise, he will again have to be admitted for treatment and surgery, the former deputy chief minister's son said. (Photo: PTI)

Mumbai: Senior Nationalist Congress Party (NCP) leader Chhagan Bhujbal is suffering from a pancreatic condition for which he would require further treatment and surgery, his son Pankaj Bhujbal said on Thursday.

Chhagan Bhujbal, granted bail in a money laundering case last week, was earlier this morning released from the civic-run KEM hospital in Mumbai where he underwent treatment for nearly a week.

After the discharge, his son issued a statement saying, "My father is suffering from an ailment related to pancreas for the last two months. He was admitted to the JJ Hospital and later to KEM for treatment."

"With the treatment and care from expert doctors at KEM, he is slightly better," the NCP legislator said, adding that his father will require further treatment and surgery.

He said since Chhagan Bhujbal was away from his family for more than two years, he returned home today with the permission of doctors treating him.

As per doctors' advise, he will again have to be admitted for treatment and surgery, the former deputy chief minister's son said.

"I thank the KEM staff for looking after him and co-operating in this difficult period," said Pankaj Bhujbal, the MLA from Nandgaon seat in Maharashtra's Nashik district.

Bhujbal, 70, in jail since March 2016 in connection with the money laundering case, was granted bail on May 4 by the Bombay High Court after it took into consideration his old age and deteriorating health.

He was later admitted to the KEM hospital in Parel area after he was released from the Arthur Road Jail.

Bhujbal, who handled the Public Works Department in the Congress-NCP government, was arrested in March 2016 after the Enforcement Directorate found in an inquiry that he allegedly misused his office in awarding contracts for PWD projects, causing a loss to the exchequer.