The informer tipped-off the crime branch following which unit IX of crime branch laid a trap at a restaurant in Bandra and apprehended them. 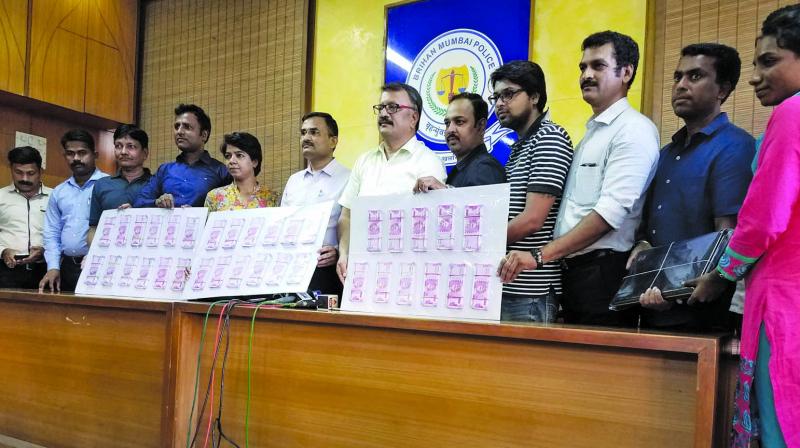 The arrested trio believed the rural populace would be gullible owing to less availability of Rs2,000 notes.

Mumbai: The interrogation of three persons, arrested by the crime branch for printing photocopies of Rs 2,000 denomination revealed that they had plans of circulating the fake notes in rural areas with the idea that people there would be gullible owing to less availability of these high denomination notes. The process of finding people, who would help in pumping the fake notes in the market brought the trio in contact with one of the police informers, which ultimately led to their arrest.

Officials said that the trio, identified as Jatin Solanki (37), Vijay Kamble (39) and Sachin Bansi (25), had even replicated a mark of Mahatma Gandhi on these notes but it was not a watermark. “The fine print of Gandhiji on the notes resembles a watermark and can’t be detected easily. The colour of ink on the wades of the notes also differs and has varying shades. Hence, they thought of trying their luck in villages where many have not seen the real Rs 2000 notes and also don’t know the security features yet,” said a crime branch officer.

Solanki entrusted Kamble with the responsibility to find foot soldiers for circulating the notes. He also financed the whole operation by giving Rs 5 lakh. The accused had bought a second-hand photocopy machine for Rs 60,000 from the same amount, police officials said.

“Kamble was told to find persons who would do the work for them following which he came in contact with a person who was a police informer,” added the officer.

The informer tipped-off the crime branch following which unit IX of crime branch laid a trap at a restaurant in Bandra and apprehended them. The officials had also recovered the only Rs 2,000 fake currency note that they had used for paying their restaurant bill.