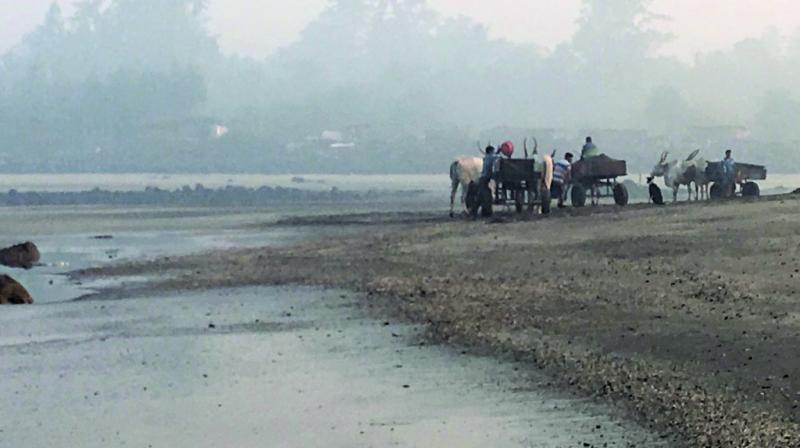 Mumbai: Non-profit organisation Awaaz Foundation has alleged that sand mining continues to be rampant at Kihim beach despite several complaints being made to the authorities.

On Thursday, the NGO wrote to the Konkan Division Office asking that illegal sand mining at the beach be stopped. Years of sand mining have taken a toll on the Kihim and Awas beaches in Raigad district. As a result of it, the level of sand in Kihim beach has dropped by over 10 to15 feet, claimed Sumaira Abdulali, founder of Awaaz Foundation.

After receiving complaints repeatedly in 2017, the local police had cracked down the illegal sand mafia at Kihim beach, however, the illegal practice has again surfaced in the area. Awaaz Foundation claimed that around 15 bullock carts were spotted loading sand from the beach. “The entire beach has already been seriously impacted by sand mining, which still continues at the creek that intersects Kihim and Awas beaches. While the police had taken action earlier, miscreants keep emerging and destroying the beach further,” said Ms Abdulali.

The NGO also claimed that numerous bullock carts cross from Awas to Kihim beach and mine large quantities of sand illegally. “A permanent access road at low tide for bullock carts has been constructed from Awas to Kihim beach across the nullah, which is accessible at low tide. This is used on a regular basis to cart away enormous volumes of sand. It shows that few villagers are in hand in glove with the sand mafia,” added Ms Abdulali. Instances of felling of trees at the site were also reported earlier.

Maharashtra has highest number of cases of non-compliance of sustainable sand mining management guidelines, 2016. According to data submitted in the Lok Sabha on Friday, the ministry received seven major complaints regarding non-compliance last year, out of which six were from Maharashtra and one from Himachal Pradesh.

The highest number of illegal mining instances have been recorded in the state as per data by the ministry of environment, forest and climate change. It recorded around 1,39,700 illegal  mining cases between 2013 and 2017.

According to Konkan division officials most of the cases arise in Raigad district, followed by Ratnagiri and Thane region. “We have received several complaints from all the districts except Sindhudurg and Mumbai region,” Jagdish Patil, Konkan Division Commissioner.