The state government on Tuesday handed over a cheque of Rs 10 lakh to his mother. 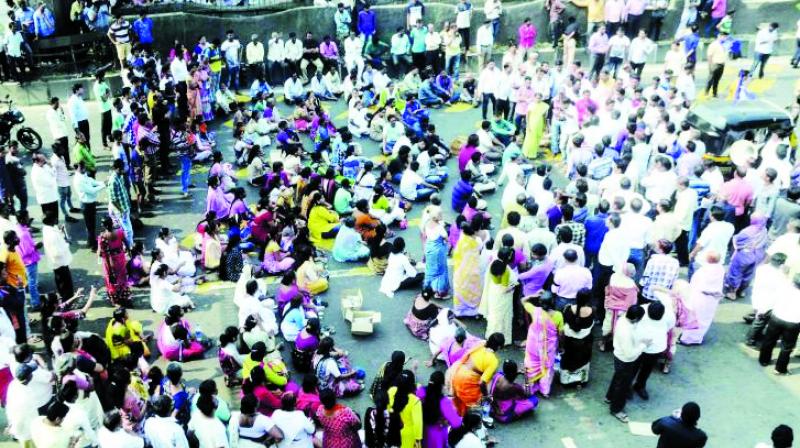 The Elgar Parishad held in Pune on January 1

Pune: Relatives of Rahul Fantangale (28), the youth who died in the violence that broke out at Bhima-Koregoan in Pune on January 1 on the 200 anniversary of the Bhima-Koregaon battle, have asked for the appointment of Ujjwal Nikam as the public prosecutor for trial. The state government on Tuesday handed over a cheque of Rs 10 lakh to his mother. Fantangale’s relatives, along with the members of the Maratha Kranti Morcha, interacted with the media, demanding speedy justice for those who suffered losses in the violence.

The Maratha Kranti Morcha members demanded that the government give a time frame within which it would complete the investigation and that compensation be given to those who suffered losses in the violence.

Tejas Dhawale, Fantangale’s cousin,  said, “We want the police and the government to arrest those who are responsible for the death of Rahul and and for this violence as soon as possible. We want Ujjwal Nikam be appointed as public prosecutor to represent government against those caused Rahul’s death and the violence,” he said. He also said, “We are organising a prayer meet on Wednesday to mark the tenth day of Rahul’s death at our village Kanhur Mesai, and we invite all of you to come for the meet.”

When asked if he or his family were associated with any organisations like the Maratha Kranto Morcha, Tejas said, “We would participate in social  programmes like morchas held by Maratha Kranti Morcha demanding speedy justice to the girl in Kopardi who was raped and killed, reservation for Marathas in education and government jobs.” He also said the police were not saying anything about the case. “They are just saying that investigation is on track and they would arrest the culprit soon. Even Girish Bapat, guardian minister of Pune district, just enquired and promised speedy justice..”

The organisers of the Elgar Parishad, including members of the Kabir Kala Manch, have been booked for promoting enmity between various groups in Pune on Monday night. A businessman from Pune, Tushar Ramesh Damgude (37), had lodged an FIR against the organisers at Vishrambaug police station.

Amrut Marathe, Police Inspector, Vishrambaug, said, “As per the FIR, Sudhir Dhawale, anchor of the programme, Jyoti Jagtap, Sagar Gorakhe,  Ramesh Gaichor, Harshali Potdar and many others had sung songs and given speeches that incited violence. They allegedly said that fight against New Peshwas has begun and they need to fight.”

The complainant said that KKR members were already arrested for their links with CPI (M). “It was the CPI(M)’s strategy to incite dalits to take the violent route instead of a constitutional one. Hence, they presented inflammatory songs and talks with the express intention of creating trouble. That led to people taking to stone pelting and torching vehicles on January 1. Hence KKM members should be booked.”

Mr Marathe said, “They have been booked under Indian Penal code 153A for creating hatred among society, 505 for availing literature inciting people to act against other communities, 117 for abetting commission of offence and 34 for working in groups.”