The applicants stated in their bail plea that they had been falsely implicated in the case as the owners of the pub are absconding. 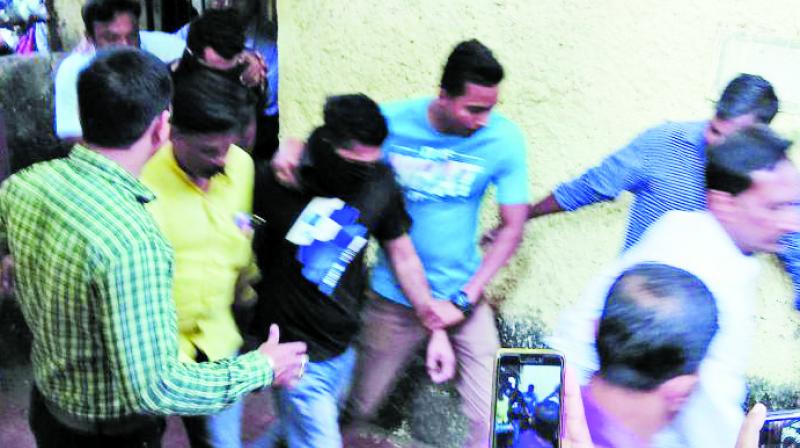 The 1 Above managers being escorted inside the court.

Mumbai: Late on Tuesday evening, NM Joshi police arrested a man identified as Vishal Karia, who is said to be a friend of Abhijeet Mankar, one of the absconding owners of 1 Above pub. Karia, a bookie by profession was found in the possession of a car owned and registered under Mankar’s name.

Police sources said that Karia, who is a resident of Juhu, was called in for questioning at NM Joshi police station, as one of the cars owned by Mankar was found parked below Karia’s building. Upon questioning, the police found out that Karia was withholding information in relation to Mankar’s whereabouts and location, and eventually arrested him under section 216 of the Indian Penal Code that pertains to harbouring an offender, who has escaped from custody or whose apprehension has been ordered.

On the other hand, Kevin Bawa and Lisbon Lopez — the two managers of 1 Above pub arrested in connection with the fire that broke out at Kamala Mills — have expressed interest in turning witnesses for the prosecution as they were present during the mishap.

The applicants stated in their bail plea that they had been falsely implicated in the case as the owners of the pub are absconding.

The bail application said, “At the most, the applicants can be prosecution witnesses who saw the incident and have also seen that the owners of the restaurants were present at the time of the incident. Moreover, the applicants are nowhere concerned with the modification, alteration and erection of the structure.”

When contacted, public prosecutor Sanjay Bawadhane told The Asian Age, “We will file our reply in due course of time and if the accused are ready to turn witnesses for the prosecution, the police will record their statements under section 164 of the Criminal Procedure Code (CrPC).”

The applicants said that they had helped rescue nearly 150 to 175 people from the hotel and had cooperated with the police since the occurrence.

The applicants said that they were ready to abide by court conditions but were insistent on bail.

The Bhoiwada magistrate court on Tuesday remanded the duo to judicial custody till January 22 and asked the police to file its say on the bail plea.