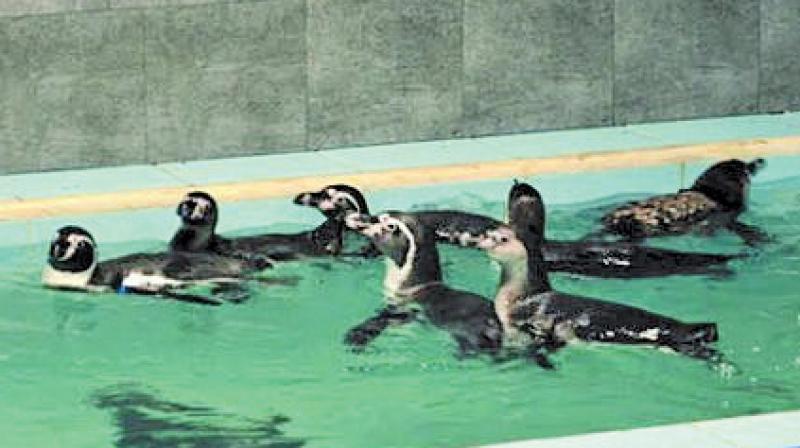 File photo of the penguins at Byculla Zoo.

Mumbai: It is not just the ill-fated penguin project, the Brihanmumbai Municipal Corporation’s other ambitious project — the bird park at Powai — was also given to the controversial contractor M/s Universal Organics, which was earlier blacklisted by the civic body for supplying substandard anaesthesia machines for civic hospitals.

It may be recalled that eight Humboldt penguins were brought to the Byculla zoo from Coex Aquarium in Seoul in South Korea in July 2016 and even before the public could catch a glimpse of them, one penguin died in October 23, 2016. The remaining seven penguins are presently kept in a quarantine facility.

Congress MLA Nitesh Rane on Monday alleged that both the penguins and bird park project were given to M/s Universal Organics because of its owner Tanmay Rai’s allegiance to Yuva Sena chief Aaditya Thackeray. “Mr Rai enjoys political support in the form of Aditya Thackeray. Along with the penguin project, he was also given the Powai bird park project without having any experience of bird conservation.”

While, M/s Highway Infra and Construction Company was one of the firms contracted for construction and upkeep of the penguin enclosure and their care, Mr Rai had allegedly identified himself as a project co-ordinator. Refuting the allegations, Mr Rai said, “I do not have any connections with Aaditya Thackeray. The bird park project was given to M/s Universal Organics because of its lowest bid. As far as penguins project is concerned I have nothing to do with it. As an animal lover, I had taken interest in penguins project. But M/s Highway Constructions and M/s Universal Organics are two different companies.”

Leader of the opposition Pravin Chheda from Congress alleged that Ms Universal Organics had cheated the civic body by fraudulently labelling Chinese-made anaesthesia machines as British-manufactured equipment in the past.