Villagers from fourteen villages of Rajapur tehsil are agitating against proposed refinery. 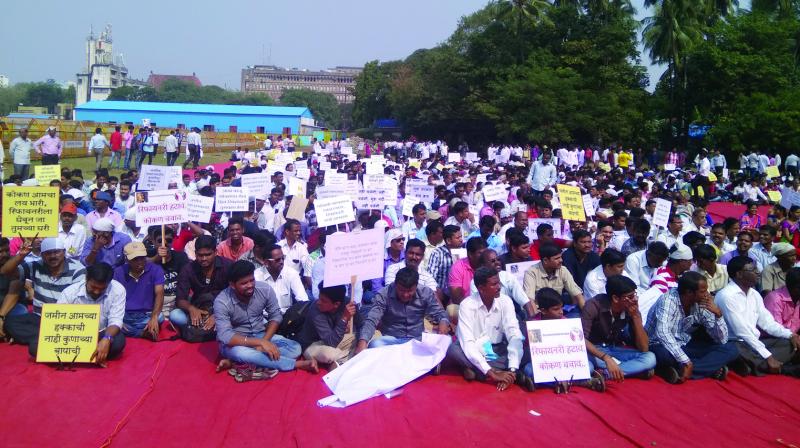 Villagers register their protest on Friday.

Mumbai: Hundreds of villagers from Ratnagiri district protested on Friday at Azad Maidan against a proposed petrol refinery in Rajapur tehsil. “We will not allow the project to take place at any cost. We will not give our land,” a protester said. Shiv Sena MP Vinayak Raut and MLA Rajan Salvi also attended the protest and have supported it.

Asked about Shiv Sena leader and industry minister Subhash Desai’s orders to acquire land for the project, the duo said that it is with protesters and without their permission land won’t be acquired.

“This project will harm the eco-sensitive zone of Konkan heavily. This is coming at the place where people have been growing crops like mango and cashews over the year. No one is ready to give up their land. It would be an injustice to the villagers if the government used force to acquire the land,” said Satyajit Chavan, the convenor of the Konkan Vinashkari Prakalp Sangharsha Samiti, a body that leading is the agitation.

Villagers from fourteen villages of Rajapur tehsil are agitating against proposed refinery. The Centre has planned the project worth around `1 lakh crore on the coastal line of the district. Almost 15,000 acre of land will be acquired for the project from 14 villages.

However, villagers are against setting up the project in their villages. They had stopped land-mapping officers of revenue and industry department to measure the area on which the proposed project will come up. On Friday, they threatened to intensify the protest. “This project is just on the periphery of nuclear power project of Jaitapur. So, it will be sensitive and could be harmful. Villagers are aware of this fact,” said Aravind Samant, a protester.

Shiv Sena MP from the area Vinayak Raut and local Sena MLA Rajan Salvi were present for the protest. Shiv Sena is also handling industry ministry in the state government, a department which has issued orders for land acquisition.