Dr V. Shankaran, CEO of Lilavati Hospital said that Dilip Kumar would be out of the ICU in the next 3-4 days. 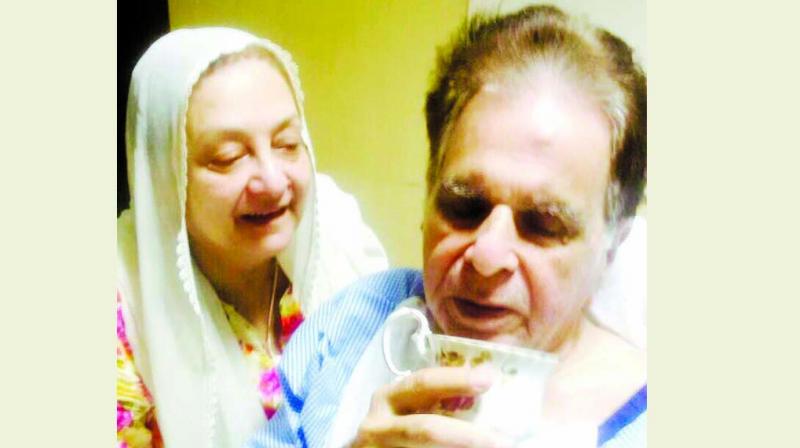 Actor Dilip Kumar and his wife Saira Banu posted this picture on Twitter.

Mumbai: Veteran Bollywood’s actor Dilip Kumar (93) was rushed to the privately-run Lilavati Hospital and Research Centre, Bandra (west) on Tuesday morning after he complained of swelling in his right leg.

However, a few hours after some medical treatment, the legend took to Twitter where he shared a photogaph of himself along with his star wife Saira Banu from the hospital. “Feeling much better now. Was admitted to Lilavati hospital for routine checkup. Your prayers are with me,” the megastar mentioned in the Twitter photograph.

Dr V. Shankaran, CEO of Lilavati Hospital said that Mr Kumar would be out of the ICU in the next 3-4 days. “The veteran actor was rushed to hospital on Tuesday morning with the complaints swelling on his right leg. He is currently in the ICU. His condition is stable. He is having proper food. We are taking good care of him. After four days, we will shifted him in a room and also discharge him,” Dr Shankaran said.

Mr Kumar twitted thanking the doctors. He said in a tweet: “A wonderful team of doctors here along with my personal physicians Dr. S Ghokale, Dr. Nitin Ghokale and Dr. R. Sharma”.

The superstar’s wife Saira Banu said that he is doing much better now. “But he will be in (hospital), as we want to get his treatment done. The doctors here are taking good care of him,” Ms Banu tweeted.

During his six-decade long career, the legendary actor, whose real name is Mohammad Yusuf Khan, acted in many superhit Bollywood films like, Madhumati, Devdas, Mughal-e-Azam, Ganga Jamuna, Ram Aur Shyam and Karma. He was last seen on the silverscreen in the movie Qila in 1998. The government honoured Mr Kumar with the Dadasaheb Phalke Award in 1994 and the Padma Vibhushan in 2015.