However, BMC has permitted the use of 'mild' crackers on Laxmi Pujan, saying people can use 'anar' and fulzadi within their private premises 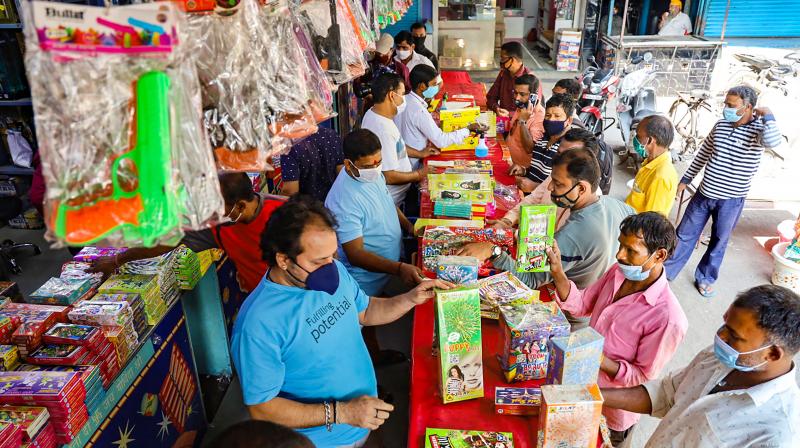 Mumbai: The Shiv Sena-led Brihanmumbai Municipal Corporation (BMC) on Monday announced a ban on use of firecrackers and fireworks in the city, ahead of Diwali, saying the step was being taken to check coronavirus spread.

The civic body has, however, permitted the use of 'mild firecrackers' on Laxmi Pujan (November 14), saying Mumbaikars can use 'anar' (cracker known for a sparkling display and showers of coloured sparks upwards) and fulzadi (sparklers) at their private premises on that day.

In a circular, the civic body said firecrackers cannot be burst on the premises of hotels, clubs, gymkhanas, organisations, and on commercial campuses. Similarly, fireworks display events cannot be organised.

"Let us strive to have a cracker-free Diwali festival this year to save our great city of Mumbai from a possible second wave of COVID-19," said BMC commissioner Iqbal Singh Chahal.

The circular stated the ban will come into effect immediately.

"COVID-19 patients face breathing problems and their oxygen level could go down. Considering this possibility, they could suffer due to the smoke of crackers. Hence to avoid any trouble to COVID-19 patients, the ban will come to effect now," it said.

The BMC also appealed citizens to celebrate the festival of lights with due precaution and by following COVID-19 protocol.

Ward officers of all 24 civic wards in Mumbai have been directed to take strict action under the Epidemic Diseases Act, 1897, the Disaster Management Act, 2005, and other laws against violators of the ban, it said.

The BMC's decision came in the wake of the state government's appeal to citizens to avoid bursting firecrackers this Diwali as the resultant pollution could cause breathing problems among COVID-19 patients.

A civic official said the BMC studied similar orders issued by other state governments, including Rajasthan, adding that under the Epidemic Diseases Act, they can impose a ban on bursting of firecrackers at public and private premises during a pandemic.

The official said state environment minister Aaditya Thackeray had asked the BMC to explore the possibility of banning firecrackers during the pandemic to avoid air pollution.

A proposal for a 'cracker-free' Diwali was put forth by state public health minister Rajesh Tope. In a recent review meeting with senior COVID-19 task force members on the preparedness for a possible second wave, Tope had said firecrackers could have an adverse effect on lungs.

Mumbai's COVID-19 caseload stands at 2,64,543 while 10,442 people have succumbed to the infection so far, as per the municipal corporation.