On Friday, the maximum temperature in city was recorded at 30.9 degrees celsius, almost two degrees less than the normal average temperature. 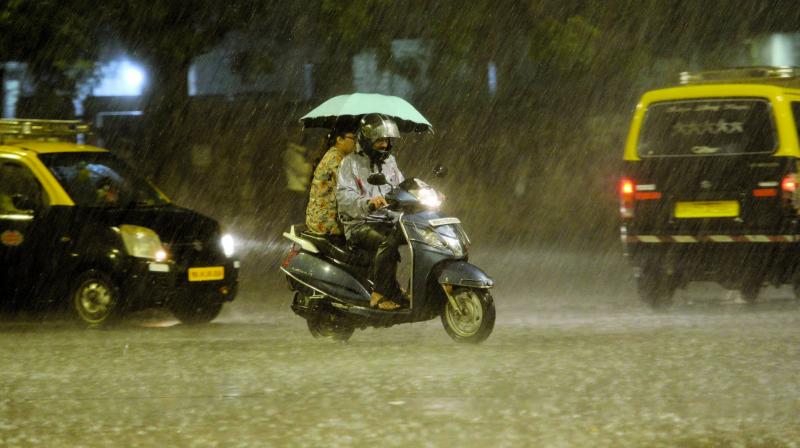 Mumbai: Mumbai received moderate to heavy rainfall in several areas on Friday. According to India Meteorological Department (IMD), the intensity of rains was higher in suburbs and Thane.

Weathermen attributed the rains to post Maha cyclone effect, which has now reduced to depression over the Arabian Sea, causing rainfall in Maharashtra and Gujarat.

Heavy spells of rain were recorded in areas like, Borivali, Kandivali, Malad, Santacruz, Ghatkopar and Chembur during early hours of Friday accompanied by lightning and thunder at some places. Mumbai recorded 62.3 mm overall rainfall on Friday.

According to the IMD, during the last 24 hours since 8:30 am on Thursday, Santacruz observatory recorded 32.6 mm rains, while the Colaba recorded 0.2 mm rains.

“These rains can be attributed to the weakening of cyclone Maha, which has now fizzled out into low pressure area over Arabian Sea and is causing rains in Mahara-shtra and Gujarat,” said an IMD official.

“Effect of cloudiness caused by remnant of Maha clouds depression. In Mumbai, short spells of rain right now in the early morning in different pockets of suburbans, more towards western side (sic),” K.S. Hosalikar, deputy director general, IMD Mumbai said in a tweet.

According to Skymet Weather, a private weather forecasting agency, the weather system is expected to weaken further, and its circulation will retrack and gradually come over Central Arabian in the next two to three days.

“Thus, the proximity of this system and retracking of it into the central parts of Arabian Sea will keep the wind flow as easterlies. Therefore, very light rains may be seen over Gujarat and Konkan,” read the Skymet Weather report.