Governor Bhagat Singh Koshyari had asked him to continue as “acting chief minister”, he told reporters. 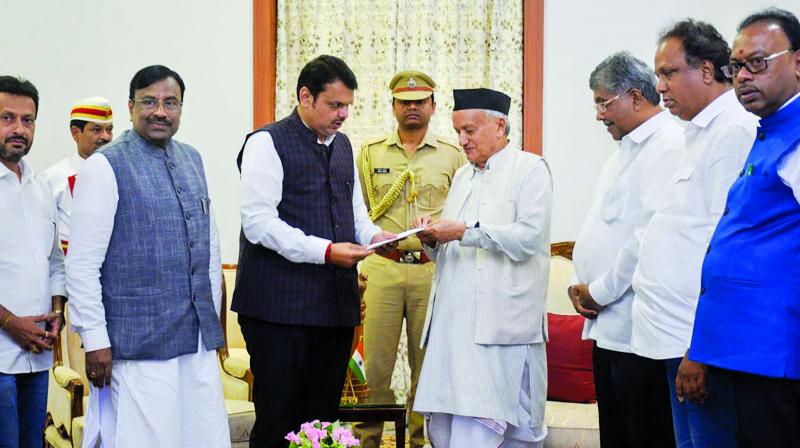 Devendra Fadnavis hands over his resignation as the chief minister to Maharashtra governor Bhagat Singh Koshyari in Mumbai on Friday. (Photo: PTI)

Mumbai: In a major shift in its strategy, the BJP on Friday said that “whichever” government comes to power in Maharashtra, it will be formed under the leadership of BJP. The party had so far maintained that it would be a BJP-Sena government. Chief minister Devendra Fadnavis, who submitted his resignation to governor Bhagat Singh Koshyari on Friday, said that he called Uddhav Thackeray, but the Sena leader neither received nor returned his calls. “Shiv Sena has closed all doors for talks from the day of results. But the BJP is still open for talks. However, any future discussion will involve the “derogatory” statements made by Sena leaders against the BJP leaders. All remarks must be stopped, if the two parties are to remain together in the government, he said.

Governor Bhagat Singh Koshyari had asked him to continue as “acting chief minister”, he told reporters.

Addressing a press conference after tendering his resignation, Mr Fadnavis said he and his party were surprised by Uddhav Thackeray’s declaration on the day of the result that all the options are open for Sena. “The mandate given by the people was for the alliance,” he said, adding that BJP was wondering why Mr Thackeray made such a statement.

The chief minister said that they (BJP-Shiv Sena) have resolved many issues in last five years but this time the Uddhav Thackeray-led party shut all doors for any talks with the BJP. “I personally called Mr Thackeray but he did not receive my calls. Therefore, we have not stalled the discussion, Sena has. BJP’s doors are open for discussion,” he added.

“The Sena didn’t have time for us but they can hold a talk with the NCP and Congress thrice in a day. The Sena had decided to go with NCP-Congress from the day when the Sena chief had said that they have other options,” the BJP leader added.

He also raised the issue of the alleged criticism of their leaders by the Shiv Sena leaders and its mouthpiece Saamana. “Despite being in the power at the Centre and the state, our top leaders are being criticised. We are not going to tolerate this practice,” he added.

“We have been told that they (Sena) are speaking on the policy not on any individual. But instead of criticising the policy, we have seen criticism on individuals. The world has recognised the leadership of Narendra Modi, but unfortunately they (Sena) have been criticising Mr Modi. Our opponents, including the Congress, have not made such remarks against Mr Modi. This has pained us,” Mr Fadnavis said.

Whenever the discussion would be held and this issue would also be considered during the discussion. He said, “We would like to say that a discussion can only be held if Sena admits that the statements about our leaders should not be made if they want to remain together with us, this is our pre-conditions for the talk.”

“I am saying with confidence that in the coming days, the mandate given by the people will be respected,” Mr Fadnavis added.

He also said that the governor has accepted his resignation. “I have been directed by the governor to work as a Karyvahak Mukhyamantri (as acting chief minister) unless alternative arrangements are made. At the governor’s pleasure, I will remain on this post. Whatever the alternatives could be such as a presidential rule or other,” Mr Fadnavis said. “I can not take a policy decision or initiate any new work. I will look after the routine works of the day today,” he said.

Mr Fadnavis also rubbished the allegations of horse-trading of legislators of the Opposition parties. He said, “If the Opposition has a shred of evidence regarding this, they should come up with it. The BJP never indulges in such practices.”