The newly-renovated Cooperage Bandstand will be inaugurated on October 10. 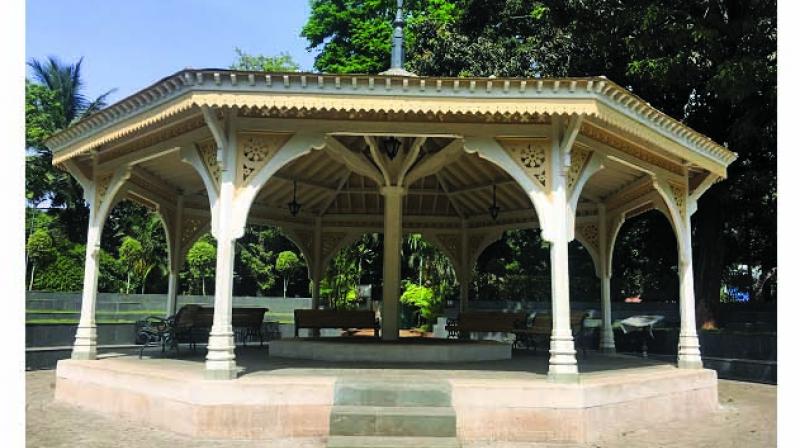 The BMC band will play at Cooperage Bandstand every Sunday. Other bands will be invited to perform as well.

Mumbai: The bandstand culture is all set to be revived in the city as the newly-renovated Cooperage Bandstand will be inaugurated on October 10. While the municipal band will be played here every Sunday, the Brihanmumbai Municipal Corporation (BMC) is also planning to invite other musical bands to perform there.

The 150-year old Cooperage Bandstand has been restored by the BMC at a cost of Rs 55 lakh. The restoration work, which commenced in 2017, included revival of the circular wooden canopied structure with original Burma teak wood and replacing the tiled roof with metal sheets.

The restoration work was allotted to the conservation firm Vaastu Vidhaan Projects and Jeernodhar Conservators.

The Cooperage Bandstand is built mostly of wood with a strong stone base. Octagonal posts on the periphery with decorative panel brackets, edged with minutely carved facia board.

The unique practice of musical bands playing in open public spaces began from here, leading to the emergence of ‘bandstands’ in the city.

After the inauguration of the Cooperage Bandstand, it will be available for open performances from various musical bands, said Kiran Dighavkar, assistant municipal commissioner, A ward. “The Cooperage bandstand will be inaugurated by the municipal band. But we also plan to invite various bands from the army, the police, the cathedral and even from city schools and colleges to participate. They will be allowed to perform music free of cost,” he said.

Conservation consultant Rahul Chemburkar from Vaastu Vidhaan said, “The dismantling of the wooden structure of the Cooperage Bandstand and later its rearrangement was one of the major challenges before us. Its plinth and steps were also buried entirely. They had to be unrevealed up to a height of one metre during restoration.”

The Cooperage Bandstand will be the first heritage structure in the city to have a Quick Response (QR) code. “We have installed an information plaque in which there is a QR code, which can be scanned on the mobile. It will connect you to the Facebook page, which is dedicated to the Cooperage Bandstand,” said Mr Chemburkar.