The fire officials had to use thermal imaging cameras to determine the volume of diesel fuel left in the tank. 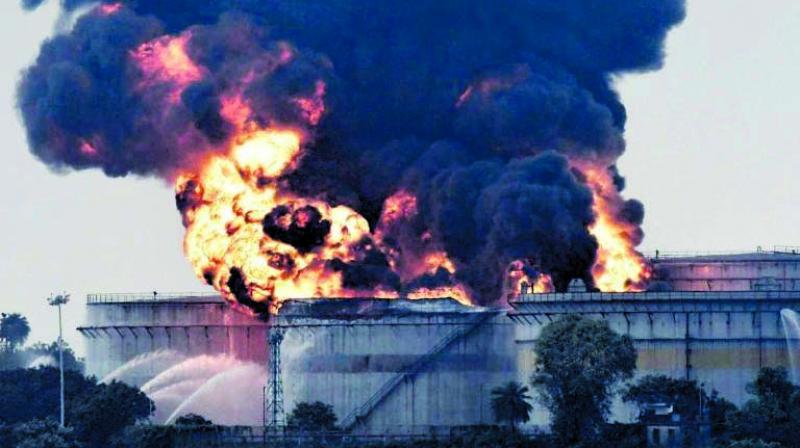 The blaze started on Friday evening around 5pm.

Mumbai: It took three days till the fire at Jawahar Dweep (Butcher Island) was finally doused by the Mumbai Fire Brigade (MFB) on Sunday. According to the fire chief, P.S. Rahangdale, the fire was confined to the state-run Bharat Petroleum Corporation Limited’s (BPCL) tank No 13, which exploded due to high heat. However, cooling operations are underway now and no casualty has been reported so far.

“Due to tremendous heat, the affected tank defragmented at about 11.45 am on Friday. There was fear of involvement of other tanks in the fire and huge risk was also feared for the persons involved in the fire-dousing operations,” said Mr Rahangdale. The fire fighting operations were carried on for three days by MFB and MbPT (Mumbai Port Trust), with the help of three fixed monitors and two portable foam induction monitors.  As of now, the cooling operations of adjoining tank no 14, 15, 16 and 12 are in process by using water curtain from all sides.

The 30,000 kilolitre tank was filled to capacity when it caught fire. The fire officials had to use thermal imaging cameras to determine the volume of diesel fuel left in the tank. All other containers were decanted when the operations were in process.

“It is the best operation because in the past, huge damage to property and loss of lives have occurred in such operations. The teams involved here made it possible to contain the fire to the affected tank in a day-and-night operation lasting three days,” added Mr Rahangdale.