Ranaut had said that the notice was meant to stop leakage work in the office. 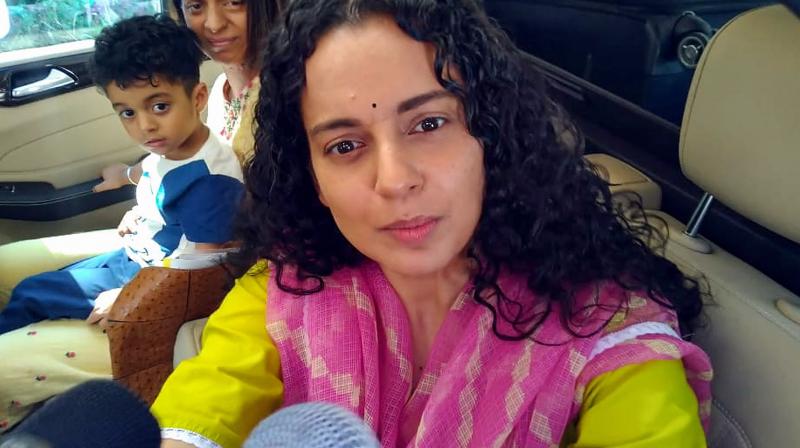 This comes a day after the BMC issued a stop work notice to Ranaut, claiming that several illegal alterations had been carried out in her office.

The 33-year-old actor, who is scheduled to reach here later in the day, has alleged that the Maharashtra government is targeting her because of her fight with the Shiv Sena

The BMC had posted a second notice outside her bungalow, informing of the action the civic body was set to take. The Bollywood actress had been given 24 hours to produce documentary evidence proving authorisation of these works, warning her that the structure may be demolished failing to do so.

The BMC had issued a notice under section 354/A of the Mumbai Municipal Corporation Act on her ‘Manikarnika Films’ office at Pali Hill area of Bandra. The three-page notice, which was pasted on the office gate, mentioned that there were several alterations like a ‘toilet being converted into office cabin,’ ‘unauthorised kitchen in the store room’ and 'new toilets being constructed alongside staircase'.

"If you fail to stop the execution of work forthwith or if stopped and fail to produce permission within 24 hours, I shall under Section 354(A) and in exercise of powers and functions conferred upon me as aforesaid without any further notice cause the said building or work to be removed or pulled down, at your risk and cost," the notice read.

The actress on Monday had shared videos of BMC officials inspecting her office and expressed apprehension that they may demolish the structure.

However, the BMC officials had said the visit to Kangana’s office was a part of a regular exercise to keep a tab on illegal constructions. Parag Masurkar, deputy municipal commissioner, had said that several other row houses in Bandra were also inspected during the drive. He also confirmed that Ranaut’s office was a residential property as per the civic records.

In a parallel development, trouble mounted for Ranaut after the Maharashtra government on Tuesday said the police will probe allegations that she took drugs, while alterations made at her bungalow came under the civic body's scanner. Home Minister Anil Deshmukh said the Mumbai police will probe allegations by actor Adhyayan Suman that Ranaut took drugs.