Rise in visarjans at artificial lakes

Activists claim that there has been at least a 10 per cent rise in visarjan across artificial lakes across the city. 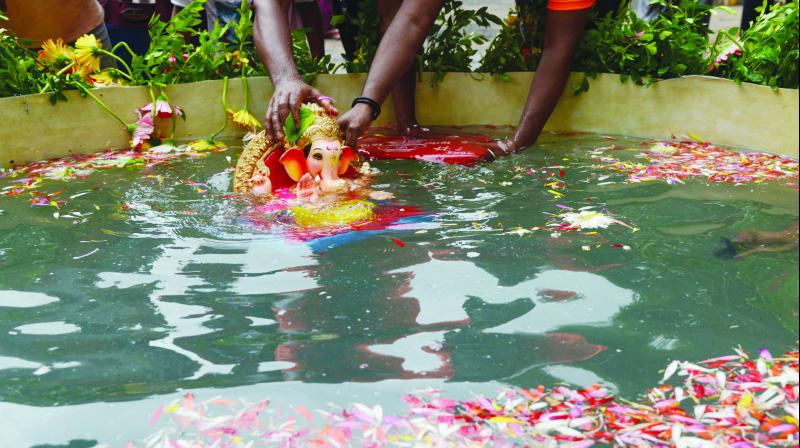 Mumbai: Over the last two to three years, Ganesh visarjan has been bringing some good news to environment enthusiasts. Activists claim that there has been at least a 10 per cent rise in visarjan across artificial lakes across the city.

“Although the rise in percentage may look less, it is an indication that people are turning towards environment-friendly visarjan. While POP idols are preferred over eco-friendly idols, the increase in visarjans at artificial ponds has led to less damage to beaches in the last few years”, said river activist Gopal Jhaveri.

The Brihanmumbai Municipal Corporation (BMC) has been carrying out various awareness programmes to encourage people to adopt artificial lakes for performing visarjans.

The northern suburb of Borivali has four artificial lakes, while Dahisar, Kandivali, Malad and Ghatkopar have three each.  Artificial lakes are also found in Bandra, Santacruz, Worli, Sion and other suburbs.

Mumbai also has 69 natural immersion spots. However, the Ganpati idols and other items related to the festival are usually washed ashore on Girgaon and Juhu beaches, where several major idols are immersed, damaging the beaches.

After the success of the chocolate Ganesha idol, Santacruz resident Rintu Rathod has made a Ganesh idol out of payasam kheer. This idol will be later immersed in milk and distributed to needy children across the city. The Ganesha is loaded with dry fruits, milk powder, broken rice, sugar, elaichi, saffron, and weighs 25 kg.