PoP less of a threat this year

Clean-up volunteers record drop in such idols after immersion. 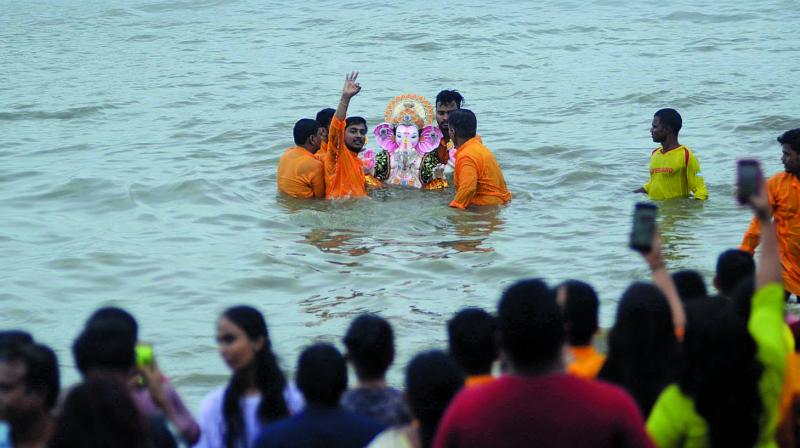 The garbage also included flowers and decoration items that are used during visarjan.

Mumbai: If the iconic character Captain Planet were real, he would be a happy man right now. Even as Ganesh visarjan continues in full swing across the city, some citizens have decided to do their bit to clean up city beaches after the revelries. Interestingly, these ‘beach crusaders’, who are deployed at Juhu Koliwada, Dadar and Girgaum beaches, claim that there has been a drop in Plaster of Paris (PoP) idols washing ashore this year.

Chinujeet Kwatra, who is spearheading the cleanliness drive in Dadar beach, said that PoP idols found this year at the beach have only been 35 per cent of the PoP idols that were washed ashore in 2018. In the last four days, 70 PoP idols have been collected while cleaning the Dadar beach.

“It is a positive sign, as last year more than 200 idols were recovered from the shores here. Juhu Koliwada has also recorded a remarkable change this year, where we collected only 30 idols during two days of immersion,” said Mr Kwatra.

According to the beach crusaders, around 2000 kilograms of garbage has also been recovered in the last three days from Juhu Koliwada and Dadar beach. The garbage also included flowers and decoration items that are used during visarjan.

“The way we revere Ganesha idols during these 10 days of the festival, the same respect should be given to it after Visarjan as well,” laments Mr Kwatra.

Meanwhile, two Non-Governmental Organi-sations (NGOs) —Siddhi-vinayak, and Samarth Bharat Vyaspeeth — have been collecting nirmalya (flowers offered to Lord Ganesha) in order to convert them into compost, which would later be distributed to farmers.

These NGOs have salvaged more than six tonnes of flowers from various pandals across different immersion spots in the region.

Samarth Bharat Vyas-peeth, which collects the nirmalya from Thane Municipal Corporation-installed bins, converts them into fertilisers at an unit in Kopri.

The floral waste is converted into compost in 12 days. The compost is used as a soil conditioner and helps adds nutrients to the soil.