The Colaba and Santacruz observatories received 66 mm and 119 mm of rainfall respectively in the last 24 hours. 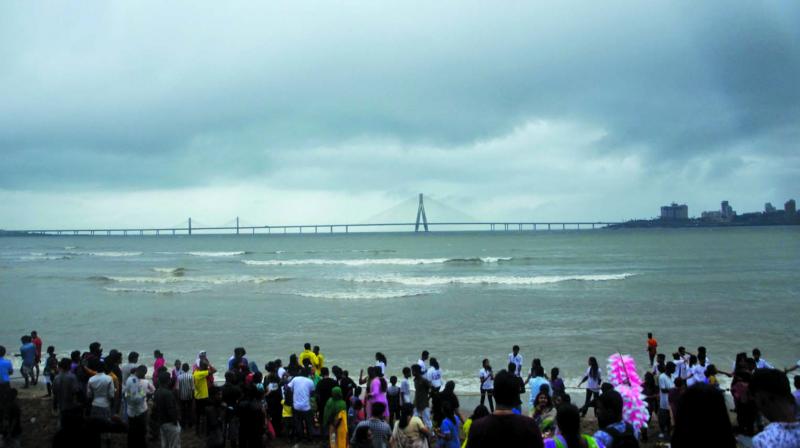 Black clouds over the Arabian sea at Dadar Chowpatty on Sunday in Mumbai. (Photo: Shripad Naik)

Mumbai: Mumbai and surrounding areas received moderate to heavy showers on Sunday while the India Meteorological Department (IMD) has predicted heavy spells of rain in the city on Monday. The Colaba and Santacruz observatories received 66 mm and 119 mm of rainfall respectively in the last 24 hours.

The IMD on Thursday stated that Mumbai had crossed the seasonal rainfall mark — 3,000 mm. Not only the city but also Thane district has recorded more than its usual share of season rainfall this year.

The average rainfall that Thane district receives from June 1 to October 31 is 2,450 mm, while the district has already received 3,575 mm between June 1 and September 8 this year.

On the same day last year, the Colaba and Santacruz observatories had recorded 1,732 mm and 2,194 mm rainfall respectively.

Meanwhile, heavy rains in Maharashtra’s Gadchiroli district since the last five days have inundated part of Bhamragad tehsil, with 120 villages under it losing contact with the district administration, a revenue official said on Sunday.

According to the official, more than 500 people have been shifted to safer places. Bhamragad is located on the right banks of a confluence of Indravati River, a tributary of Godavari river, the Pearl Kota, and the Pamul Gautami in east Maharashtra bordering Chhattisgarh and Telangana.

As per the latest information, 11 tehsils in the district, except Bhamragad, are out of the flood situation.

No casualties have been reported as yet though two persons are missing from Aramori and Chamorshi tehsils, he said.