Locals say the boat belonged to the gram panchayat and villagers were using it to rescue stranded people. 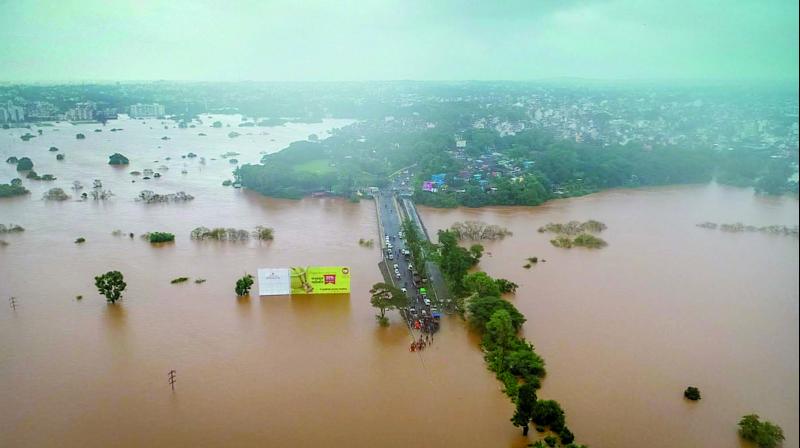 Fourteen people are feared to have drowned after an overloaded boat capsized during rescue operations in Maharashtra’s flood-hit Sangli district on Thursday. The boat was carrying around 27 to 30 people when it overturned. (Photo: Representational)

Mumbai: Fourteen people are feared to have drowned after an overloaded boat capsized during rescue operations in Maharashtra’s flood-hit Sangli district on Thursday. The boat was carrying around 27 to 30 people when it overturned. Sixteen passengers managed to swim to safety. “So far, nine bodies have been found. The boat overturned near the Bhamnal in Palus block of Sangli district,” said the divisional commissioner of Pune division, Deepak Mhaisekar.

Locals say the boat belonged to the gram panchayat and villagers were using it to rescue stranded people.

Special inspector general (law and order), Maharashtra police, Milind Bharambe said, “It is feared that 11 to 14 people might have died. Howev-er, search operations are going on. A team of around 100, including the police, is involved in search and rescue operations. Till now, there has been no development,” he added.

The Navy has also deplo-yed several rescue teams in Sangli, Kolhapur, Belgaum and other flood-affected districts. How-ever, the Navy spokesperson, Mehul Karnik, has clarified that the boat that capsized was not a Navy boat. Navy teams are operating rubber inflated Gemini boats, which have the capacity to carry sev-en to eight people at a time. The Navy has stated that women and children would be rescued on priority basis.

In Kolhapur, four rain-related deaths have been reported so far. Maharashtra is grappling floods that have claimed 16 lives and displaced 1.32 lakh people in the past week. A total of 28 teams of National Disaster Response Force (NDRF) are involved in rescue and search operations across the state. Five teams have come from Orissa and five from Bhatinda.

Kolhapur and Sangli districts are the worst affected in the floods with these roads completely cut-off. Altogether 22 rescue teams are working in Kolhapur (NDRF-5, Navy-14, Coast Guard-1, Army column-1, SDRF-1), the official said. In Sangli, 11 teams have been deployed (NDRF-8 Coast Guard-2, Army-1).

A total of nine districts across the state and 450 villages are submerged under water after river have overblown due to heavy rains. The India Meteorological Department (IMD) had issued “extremely heavy rain” warning for Pune, Satara and Kolhapur districts of Western Maharashtra for Thursday. For Sangli district, the alert was only for light-to-moderate rain, the Met department had said on Wednesday evening.