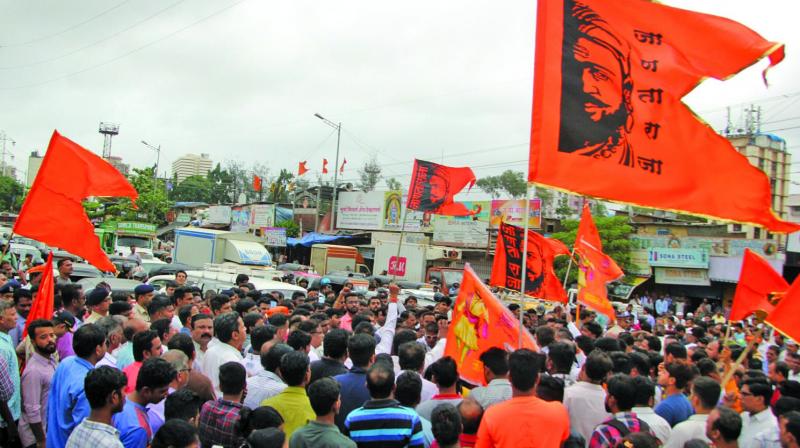 In all, over 2 lakh personnel will be deployed across the state to maintain law and order.

Mumbai: The split in the Maratha Kranti Morcha (MKM) has forced the parent body of the community to exclude Thane, Navi Mumbai and Parli from the Maharashtra bandh on Thursday. They will only have a ‘thiyya’(sit-in) agitation. But the city will not be exempt from Thursday’s bandh call. The MKM issued a statement calling for a peaceful bandh.

A day before the bandh on Wednesday, a meeting took place between MKM coordinators and police in Thane. Police told the protesters that they would take strict action against violent protests.

In a meeting called by chief secretary at Mantralaya over the bandh, issues regarding the smooth flow of traffic and milk supply were discussed. Officials said that instructions have been issued for smooth operation of traffic and uninterrupted supply of essential commodities. This will be the second statewide bandh in the last 20 days.

“We have already announced that the agitation will be peaceful. No protester will take the law into their hands. Police are free to take action against violent protesters, if any,”
the MKM coordinators said.

It was clear on Wednesday evening itself that there is a split between MKM coordinators. The agitation started in Parli and Beed but Aabasaheb Patil, who has been leading the agitation there, has postponed the protest till November 30 following chief minister Devendra Fadnavis’ assurance that the legal process for Maratha reservation will be cleared by November 30.

Meanwhile, the Sambhaji Brigade, one of the strongest body of Maratha youth, has appealed for a peaceful protest. “We should register our opposition against the mere assurance by the state government in a peaceful manner,” said its chief, Mr Pravin Gaikwad.

The Centre has dispatched six companies of the RAF and one company of the CISF to deal with Thursday’s protests. The personnel will mostly be positioned in sensitive areas likes Navi Mumbai, Aurangabad, Nanded and Kolhapur.

Over 2,000 Home Guards, officials from the State Reserve Police Force and local police will also maintain vigilance. In all, over 2 lakh personnel will be deployed across the state to maintain law and order.

“We have also asked local SPs to engage in dialogue with local leaders to ensure that order is maintained,” ADGP (Law and Order) Parambir Singh said.

The bandh at a glance

Government to ensure smooth operation of traffic and uninterrupted supply of essential commodities, including milk.

Who will be affected

The MKM has given a call for a total shutdown in state except for emergency services.