Martyred Major Rane will be laid to rest today

Major Kaustubh Rane was martyred during an operation to flush out terrorists in a bid to foil infiltration in Jammu and Kashmir. 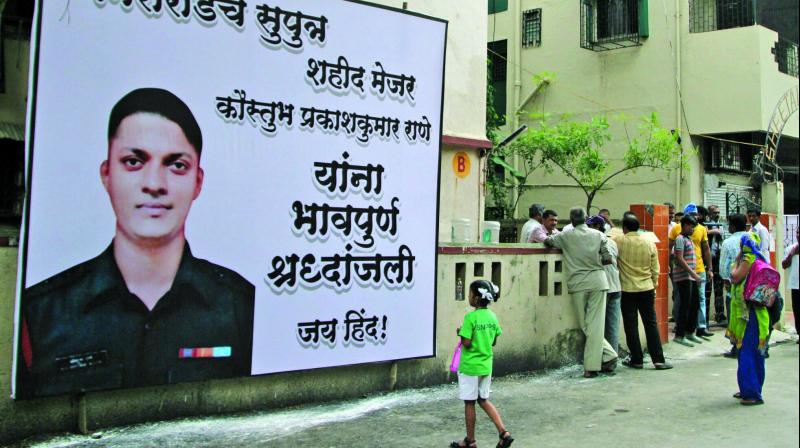 Mumbai: Martyred Indian Army Major, Kaustubh Rane, 29, who breathed his last in Bandipore on Tuesday was flown to Mumbai late on Wednesday. The mortal remains were taken to his home in Mira Road and will be laid to rest. The body reached Mumbai post 8pm.

“Major Kaustubh Rane was martyred during an operation to flush out terrorists in a bid to foil  infiltration in Jammu and Kashmir. He will be laid to rest with full state honours on Thursday in Bhyandar,” stated an officer from the Defence.

Major Rane is survived by his parents, a wife and a two-and-half year old son. Major was martyred along with three other soldiers of the Army in Gurez sector. The forces succeeded in gunning down two militants in the operation.

Several dignitaries are stated to visit the funeral of Major Kaustubh Rane and hence the police have stepped up security in Sheetal Nagar area of Mira Road. The police will step up security at the funeral place and enroute on Thursday.

Major Rane, a resident of Bhayander, and three soldiers were killed while foiling an infiltration bid in north Kashmir’s Gurez sector. At least two militants were gunned down in the operation. According to an official, Major Rane is survived by his parents, wife and a two-and-a-half-year old child.