Municipality yet to begin approval process for mandals

In order to ease the approval system, a ‘single window clearance’ was introduced. 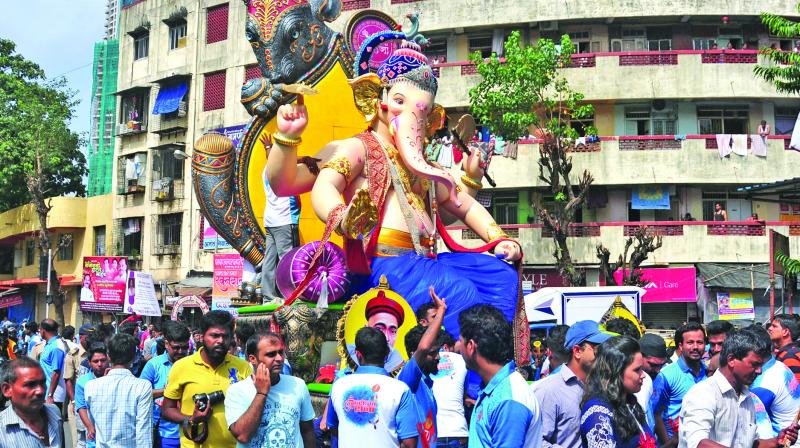 Ganesh Chaturthi will be celebrated on August 25.

Mumbai: Ahead of Ganesh Chaturthi that will be observed on August 25, city-based Ganpati mandals are in a fix as the BMC is yet to start the single-window clearance system for granting civic permission for setting up mandals. Only the ‘D’ ward (Grant road) has commenced with giving out forms for seeking approval for the mandals, while the other 23 administrative wards are yet to begin the process, alleged Brihanmumbai Sarvajanik Ganeshutsav Samanvay Samiti (BSGSS), a Ganesh mandal coordination committee in the city.

“We had suggested that BMC start with an online system to ease the permission procedure, but they are yet to start with it. The ‘single window clearance’ which was meant to seek all required permissions, like fire, traffic, police etc, itself was commenced on Tuesday. It should have begun at least a month before the festival,” said Naresh Dahibhavkar, president of BSGSS.

Once the application is forwarded for permission, the BMC is expected to clear out all permissions within a span of three days. According to the High Court order, the civic body is expected to start the permission procedure a month prior to the festival, however, it was only yesterday when the forms were given out from one of the civic ward offices. “Now, that they have started the procedure late, BMC will have to bear the pressure. They will need additional manpower now,” added Mr Dahibhavkar.

HC had issued a directive to civic body against structures encroaching on public spaces, soon after which the BMC drafted rules for mandals so as to protect the interests of pedestrians. It made approvals from the fire, traffic and police departments mandatory. In order to ease the approval system, a ‘single window clearance’ was introduced.

According to the data given out by BSGSS, there are around 11,800 mandals, out of which around 4,800 are public, and remaining are erected on private premises. Last year, around 30,359 idols were immersed in artificial and natural immersion sites, of  which there were 785 public ganesh idols and 21,574 household ganesh idols.