The snake was spotted by the man’s neighbour. 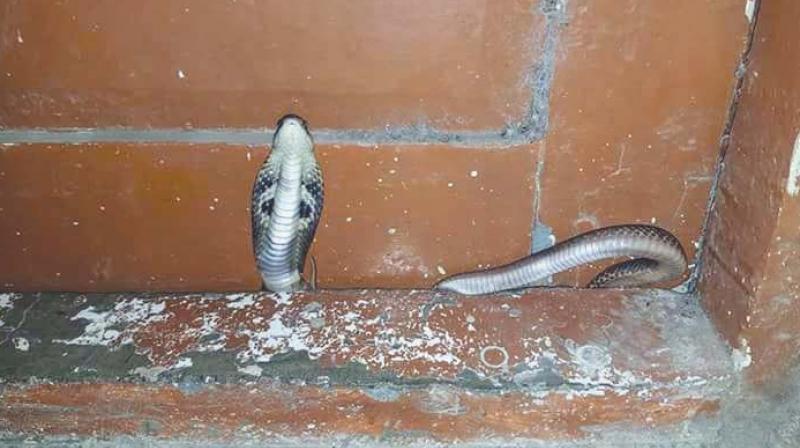 The man was saved after a neighbour spotted the snake.

Mumbai: A Brihanmumbai Municipal Corporation (BMC) official is counting his lucky stars after a venomous snake outside his home’s door was spotted and rescued just in time on Saturday.

R.B. Kolekar (51), an engineer in the civic body, was saved when a neighbour who spotted the spectacled cobra, called the rescuers just in time. The snake would have entered the house had he opened the door.

It was around 10 am on Saturday when Mr Kolekar, who lives alone on a ground floor flat, received a call from one of the residents of his building informing him about a snake on his main door.

A worried Mr Kolekar began making calls and residents of his building came forward to help him. Mr Kolekar’s neigbours then contacted the Resqink Association for Wildlife Welfare (RAWW), a non-governmental organisation. Shortly after, a team of RAWW rescuers reached the spot and rescued the snake.

Mr Kolekar said, “I was unaware about the presence of the reptile and hence could have opened the door, allowing the snake to enter our home.” Mr Kolekar, who works in Worli, has been living in Mulund’s Khindipada area in the BMC staff quarters for eight years.

“I think this is just the third time that I have seen a snake, but I have never witnessed it in such close proximity,” he said.

Vivek Shethia and Saiyyam Dharmashi of RAWW reached the spot rescued and released the snake back into its natural habitat.

Mr Shethia, a volunteer with RAWW, said, “The residents of the society had panicked and were all gathered near the flat. Though we took only

15 minutes to safely rescue the snake, we had to calm the residents who were tensed about the situation.”