Yevle said that the demand for a wage hike was being made for the past two years but the administration had been ignoring it. 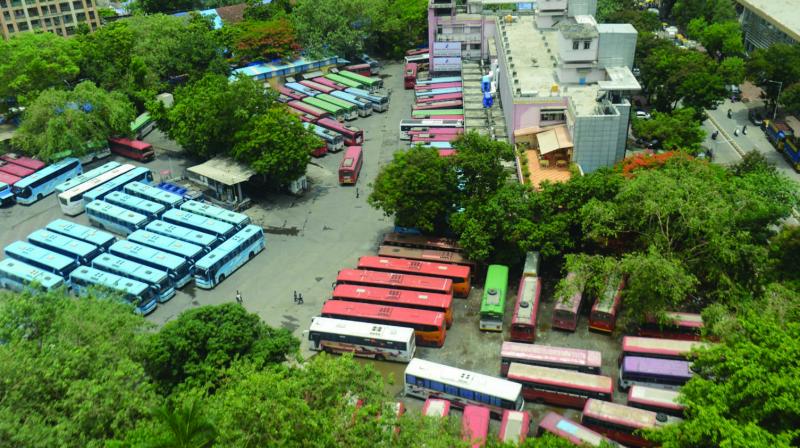 Buses lie vacant at the Parel ST depot in the wake of the strike. (Photo:Debasish Dey)

Mumbai: Employees of the Maharashtra State Road Transport Corporation (ST) went on strike at several of the undertaking’s depots, demanding an immediate pay hike. Bus services were affected due to the strike, and thousands of commuters bore the brunt of it. The strike comes two days after the MSRTC announced an 18 per cent hike for customers on the back of higher fuel and wage bills.

Transport minister Diwakar Raote said, “There was no notice given by employee unions about the strike.” Meanwhile, the ST administration has decided to take legal action against the striking employees.

A senior MSRTC official on Friday said that a section of the staff did not report to work, impacting bus operations. “This move is unacceptable and a resolution has been passed to take stern action against the erring employees. We have not received a notice from any union regarding the strike.” The senior official said that in the absence of a strike notice, the administration was in the dark about who called for the strike and what their demands were.

Rajan Yevle, former divisional secretary, Maharashtra State Transport Kamgar Sanghatana, however, justified the employees’ actions and claimed that their “miniscule” salaries were making it “impossible for them to survive”

He said, “Can you believe that our ST drivers get only Rs 10,000 to Rs 11,000 in monthly wages? Moreover, they have to stay away from their homes for at least 15 days of the month as part of their work.”

Mr Yevle said that the demand for a wage hike was being made for the past two years but the administration had been ignoring it.

Over 1.02 lakh MSRTC staffers went on strike in October last year, a few days ahead of Diwali, demanding salaries in line with the seventh pay commission recommendations.