Never before has a graduate seat become so important for all three major parties of the state. 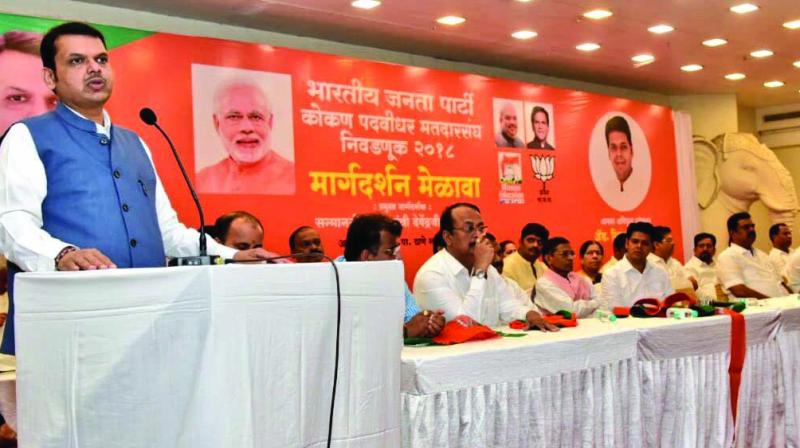 Mr Fadnavis appealed to Bharatiya Janata Party (BJP) workers in Thane saying, “This Konkan constituency was a bastion of the BJP. We want to regain it. We have a strong candidate. He has newly entered the BJP family. But party workers should work hard for the party and win this election.”

Mr Fadnavis’ personal intervention and campaigning comes on the back of two developments. One, the growing clamour within the BJP over getting candidates from outside; and NCP chief Sharad Pawar throwing himself into the fray ahead of the elections.

After the Palghar Lok Sabha bypoll, this Legislative Council election has become the next talking point in state politics. Never before has a graduate seat become so important for all three major parties of the state. The Sena is fielding its candidate and to prevent the exodus of leaders from the party, NCP, too, is fielding its candidate. Against this backdrop, BJP is pulling out all stops to win the election.

Given the buzz that BJP’s Thane unit is disappointed about the party fielding Niranjan Davkhare, former NCP MLC, Mr Fadnavis, in his address, said, “We will have to work for the party. We lost this seat last time because our strategy had some flaws. But now all leaders and workers should seat together and prepare a strategy. In the graduate council election, you will have to reach every voter. So, chalk out the strategy accordingly.”