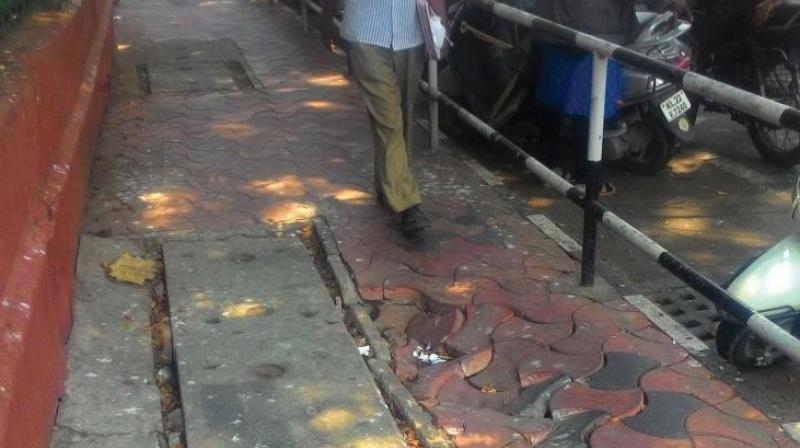 According to the experts, sidewalks in the city are badly planned, encroached upon at many places, and not uniform, making it difficult for pedestrians to make their way through traffic.

Mumbai: A survey conducted from Worli naka to Worli sea face by road safety experts from three private organisations has found that footpaths in Mumbai are anything but pedestrian-friendly. According to the experts, sidewalks in the city are badly planned, encroached upon at many places, and not uniform, making it difficult for pedestrians to make their way through traffic.

The survey was conducted Thursday morning by nearly 20 road safety experts. Elena Altieri from the World Health Organisation (WHO) said, “Our goal is not just to criticise, but we need to look at sidewalks and know the issues faced in cities like Mumbai. For instance, many sidewalks are dangerous with a lot of loose and uncovered electrical wires that could cause harm to pedestrians.”

Jessica Truang from an international organisation that crash tests cars said, “Pedestrians are most vulnerable and hence, there is a need to increase security for them.”

The survey, conducted between 8 am and 10.30 am, found that there were some stretches of road without any sidewalks at all and that signage at junctions was confusing or lost amidst other advertisements.

Kelly Larsen, an expert with Bloomberg Philanthropy’s road safety initiative, said that Indian roads in the Mumbai context had seen an increase in vehicle registration as Mumbai was a tier-I city in a developing country. “The number of cars in Mumbai is growing every year and plans are being made keeping this reality in mind. But, one mustn’t forget that there is an increase in number of people travelling on foot,” she said.

According to her, foot traffic had increased 20 per cent since 2016 and the transport ministry said that 38 per cent of the total number of fatalities occurred at “T” junctions in cities, which is why there was a need to take up the cause of pedestrians.