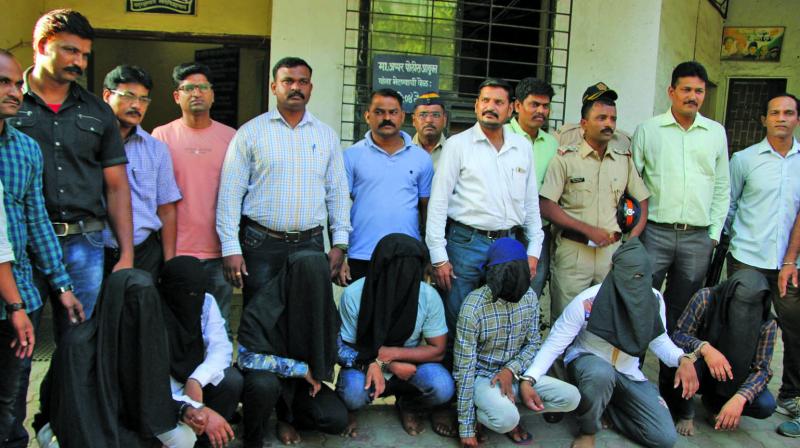 The accused are produced in a local court. (Photo: Mrugesh Bandiwadekar)

MUMBAI: The Kurar police has arrested seven persons in connection with the murder of Shiv Sena deputy shakha chief Sachin Sawant (46) in Gokul Nagar on April 22. One of the accused is from Malad while six others were nabbed from Uttar Pradesh and brought to the city.

According to the police, the murder was the result of a dispute related to an SRA project in Kandivali (east). The police identified the alleged masterminds, Brijesh Patel and Nilesh Sharma, who had hired contract killers from Nalasopara to kill Sawant and had promised a total amount of Rs 10 lakh and a flat or room in the SRA buildings to each accused.

The seven accused were produced in a local court on Tuesday and have been remanded in police custody till May 14. Patel, was eyeing the same project that Sawant was working on, and as a result they were at loggerheads. Patel had also created an office space in the vicinity of Sawant’s office. Sharma was earlier working with Sawant, but had a falling out with him a few days prior to the murder. Later, Patel and Sharma hatched a plan to kill Sawant, solely over the SRA development project situated at Durga Nagar in Kandivali (east).

A senior police officer said that the alleged masterminds of the crime, Patel and Sharma, had hired contract killers from Nalasopara to commit the crime.  The contract killers have been identified as Lokesh Singh, Abhay Patil, Sonu Pal, Amit Singh and Brijesh Singh. Police officials said one more accused, Umesh Sahani, is still wanted in the case.

According to sources, the Kurar police acted on a tip-off that the accused were hiding in their hometown in UP and sent a team to locate them. The accused were hiding in a pairs at different locations in UP’s Chamboli village. The city police, with assistance from UP police, laid a trap and nabbed the accused, following which they were brought to Mumbai on Tuesday and placed under arrest. Rajesh Pradhan, additional commissioner of police (north region) said, “The conspiracy to kill Sawant was hatched after the declaration of SRA project bid on April 11, following which there was a heated argument between Sharma and Sawant. Patel and Sharma had already paid Rs 3 lakh out of Rs10 lakh as promised.” He added, “The police has seized mobile phones and firearms from the accused, which were procured from Nalaspora.”