Zoo director Dr Sanjay Tripathi said so far, more than 20 people have been fined for indulging in such acts. 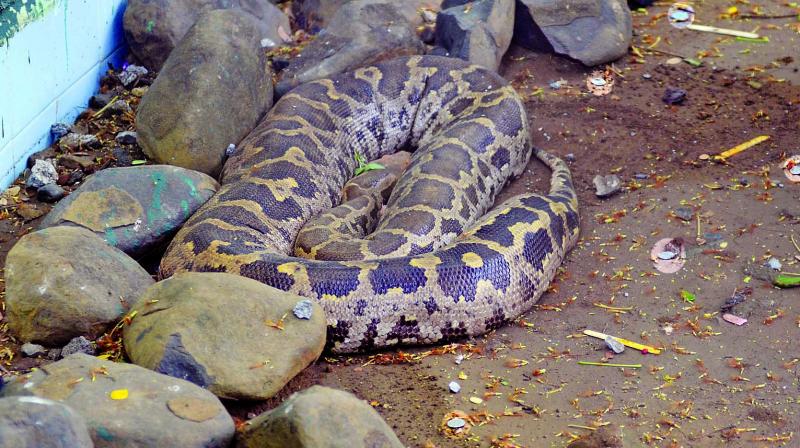 Many visitors throw one rupee coins (circled) on the python housed in the zoo, in the belief that if the coin touches the reptile, it will bring prosperity. (Photo: Shripad Naik)

Mumbai: The authorities of the civic- run Byculla zoo, known as Veer Jijamata Udyan, are having a tough time preventing recurring instances of some visitors teasing animals in the name of ushering in “good luck.”

Many visitors throw one rupee coins on the python housed in the zoo, in the belief that if the coin touches the reptile, it will bring good luck, prosperity and increase in personal wealth. Some others have been seen spitting on crocodiles, gharials and alligators despite instructions on hoardings put up at the enclosures that such conduct would result in fines. The zoo authorities collect coins worth over Rs 100 on a daily basis thrown by visitors into the python’s enclosure. Byzulla zoo director Dr Sanjay Tripathi said in the past one month, more than 20 people have been fined for indulging in such acts.

Sources said more can be caight if offenders are caught redhanded. Currently, there are no CCTV cameras installed or gaurds assigned  to keep a watch on these enclosures.

The python is kept inside a well-like structure and fenced by a grill. It is through this grill that people fling the coins.

Talking to The Asian Age, Krupesh Diwan, a visitor from Baroda, said, “We have no clue (why we’re doing it) but since others are doing, we also gave it a try.”

Another visitor, T. Sundar said, “ Throwing coins on the python brings prosperity. It is known for ushering in good luck. The coin should touch the python, you can make a wish and throw the coin on it.”

Sunish Subramanian, who runs PAWS, a non-governmental organisation that works for animal welfare and environment protection, said, “This is disgusting, it is a blind faith which only troubles animals. This is happening because there is no guard deployed readily available to control the visitors who are indulging in such idiocy.”

Byculla zoo director Dr Sanjay Tripathi said, “Teasing animals is not fair. We have put up signboards and are also extracting fines if we find anyone breaking norms.  People should also take cognisance and do not do such things.”

“The fine starts from Rs 100 and can touch Rs 500. Till now, more than 20 people have been fined for indulging in such notorious acts.”

Denouncing the practice of throwing coins into the snake enclosure, People for the Ethical Treatment of Animals (PETA) CEO Poorva Joshipura said, “No good, and only injury, can come from hurling coins at an imprisoned snake. Abused animals cannot bless, they would only curse. The severe confinement of zoos drives many animals to insanity or at least a constant state of despair.”

Since  one month's  time , there  were 20 people penalised who were caught teasing animals or throwing stones ,

Sources said more can be caight if offenders are caught redhanded. Currently, there are no gaurds assigned  to keep a watch on these enclosures.